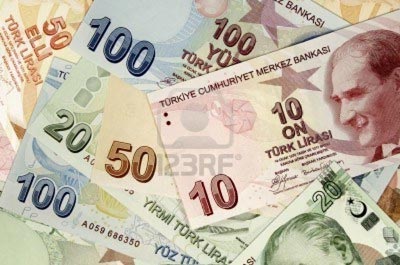 Turkey’s lira hits weakest in a month on security worries

ISTANBUL: Turkey’s lira slid to its weakest in a month on Wednesday, hit by security worries after Kurdish militants claimed responsibility for killing two police offers after an Islamic State suicide bombing this week.

The bloodshed in towns along Turkey’s 900 km (560 mile) border with Syria has given investors further pause when they are already worried by slowing growth, a crumbling currency and political instability after the ruling AK Party failed to win a single-party majority in June.

The Kurdistan Workers Party (PKK) said in a statement the killing of the two officers was in retaliation for a suspected Islamic State suicide bomb which killed 32 people, mostly students, on Monday.

The PKK said the police had collaborated with Islamic State, echoing accusations of anti-government demonstrators, who say President Tayyip Erdogan and the ruling AK Party have covertly backed Islamic State against Kurdish fighters in Syria, something the government denies.

Anti-government demonstrations have flared up since the Monday’s bombing and at least 51 people have been detained.

Another demonstration is set for this weekend.

“This weekend’s protest march against (Islamic State) in Istanbul may be considered an event risk for TRY assets,” Isik Okte, a strategist at TEB Investment, said in a note to clients.

Turkey’s central bank is due to hold its monetary policy setting meeting on Thursday, when it is widely expected to keep rates on hold.

The bank is unlikely to make a move given that a new government has yet to be formed, said Cristian Maggio, strategist at TD Securities.

“If we get a coalition that would be positive, but if an agreement is not found by Aug. 23, there will be new elections called and in that case the lira and interest rates will both experience sharp sell-offs to which the central may have to react with interest rate hikes,” he said.

“Their best strategy would be to stay on hold for now.”