Merc’s new pure sports car wows us with its wares

EDITOR WES RAYNAL: Well doesn’t that just figure. I finally get my grubby paws on the new Benz sports car and down come the rains, severely limiting my fun.

Still, it doesn’t have to be dry to know this thing is absolutely gorgeous. I love the exterior. I love that it’s smooth and curvy with little to no sharp edges or creases. It looks fast, even when standing still. It’s outstanding.

You sit really low in this thing, and the seats are tight. Frankly I found them a bit uncomfortable no matter how I adjusted them. The shift lever feels far back — because it is — thanks to the cupholders, I suspect. The low seating and fat A-pillars mean the car can be a bit hard to see out of.

That’s quibbling, though. Even in my limited driving, it was a hoot. It certainly feels like 503 hp. Barely tap the gas pedal, and the tires spin and you’re kicked in the backside. All my driving thus far has been in the comfort/soft settings. I don’t want to prang it. If I get a chance in the dry, I’ll try to play a bit. Meanwhile, this is a good car for trundling around town. Comfort mode means the ride isn’t beating me up, the steering has decent weight and the shifts are imperceptible.

DIGITAL EDITOR ANDREW STOY: I’m trying to frame the AMG GT S in terms of cars with which I have significant experience, and it’s not easy. This thing occupies a niche of its own. But what niche is it?

We were initially led to believe that the AMG GT would be a Porsche 911 competitor, but that’s not accurate in reality. Not only is the AMG lacking any vestige of rear seating, but it’s also not a practical daily driver like the 911. It’s more like the Jag F-Type R in its demeanor, but it’s got a distinctive AMG polish to its performance where the Jag is all rowdy boy racer all the time.

Because of its on-the-deck seating position, tank-like slit of a windshield and protruding sideview mirrors, the AMG gets poor marks for outward visibility. In fact, the impression from the driver’s seat, when you add in the tall, upward-sloping center stack and high dash, is that of a Gemini astronaut strapped in the capsule.

Thanks to AMG’s biturbo V8 and a hyper-responsive dual-clutch transmission, the astronaut metaphor extends to launch: The GT S has capabilities that extend vastly beyond anything I could attempt on the street; without instrumented back-to-back testing, the best way to explain it is that it’s not as playful as the Jag (assuming your idea of play is tail-wagging, tire-smoking muscle-car fun) nor as serious as a 911 Turbo. Again, it’s somewhere between the two.

Make no mistake: As with all AMG machines, the GT S may have a full dose of boulevardier flash, but this is a spectacular high-performance car. Livability is compromised, though, and the 911 Turbo still wears the “everyday exotic” crown best. 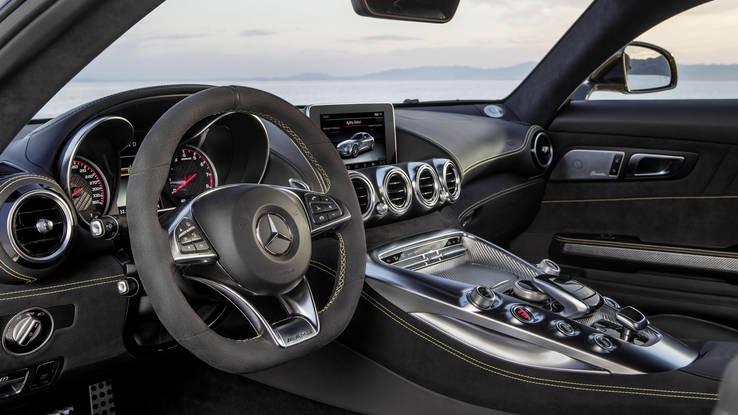 EDITORIAL INTERN JOE GROVES: I didn’t expect to spend very much time behind the wheel of this gorgeous, expensive car, but fate seemed to be in my favor. My first drive in the GT S was a quick airport run, and — Wes is right — it isn’t hard to break the tires free. Since it was my first drive of something this powerful, that was a bit of a shock.

Upon picking the car up from the airport, I found a flat rear tire. Thankfully, the car found and called the closest Mercedes dealer; after I aired up the tire, I was able to drag the car six miles north. Let me tell you, 50 mph in a car capable of nearly four times that speed is almost torture. On the other hand, it was more seat time. A quick plug and patch later, which saved us a $ 500 tire replacement, and the GT S was as good as new again.

I mainly drove the car in comfort and sport-plus modes. As Wes notes, the comfort setting loosens the suspension so it isn’t too harsh or uncomfortable. However, turn the dial to S-plus and you’ll hear the gates of hell opening when the exhaust grumbles to life. This car sounds mean! On top of the exhaust, the engine and suspension become more responsive and the ride gets considerably rougher. But rough ride or not, the GT S is more fun to drive in S-plus.

A few quirks that come with the GT S include a lack of cooled seats; sure, they’re not necessary, but at $ 150,000-plus, I expect them. Also, the infotainment controls and shift knob aren’t placed in a great spot; that can lead to quite a bit of confusion when you’re trying to keep your eyes on the road.

But those minor gripes do little to detract from this amazing car.