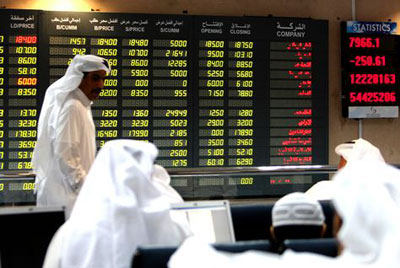 DUBAI: Saudi Basic Industries Corp (SABIC), the biggest listed company in the Gulf, may rise on Sunday after its second-quarter beat analyst estimates by a wide margin, but weak oil and depressed global equities may weigh on other stocks.

SABIC posted a profit of 6.17 billion riyals ($ 1.64 billion) for the quarter on Sunday, down from 6.46 billion riyals ago but well ahead of the average estimate of seven analysts surveyed by Reuters who had expected 4.96 billion riyals.

This could help the stock rebound after falling 1.7 percent in the previous session.

In other sectors, Saudi Arabia’s insurers may extend their rally which began last week after a series of strong earnings reports. On Sunday, AXA Cooperative Insurance posted a 36 percent gain in second-quarter profit against a year earlier and Aljazira Takaful said its profit more than tripled.

Last September, Standard and Poor’s said a price war in Saudi Arabia’s insurance industry seemed to be over and strong results from those companies may be reflecting that now.

Elsewhere in the Gulf, Bahrain’s GFH , which is also listed in Dubai and Kuwait, may attract some buyers after it said it would buy an 80 percent stake in a leading Dubai-based private school, valuing the latter at 200 million dirhams ($ 54.5 million)

The global background, however, is negative. Brent and U.S. crude futures on Friday posted their fourth straight weekly decline as weak economic data from China and a rise in U.S. oil drilling rigs applied pressure.

Gulf investors have ignored smaller oil price movements in the last few weeks, but with Brent below $ 55 per barrel and U.S. oil under $ 50, crude may once again draw their attention.

Global equity markets dropped on Friday and copper fell to a six-year low as Chinese manufacturing contracted by the most in 15 months in July.

Copper’s drop may put pressure on Saudi Arabian Mining Co. (Ma’aden), which produces it among other metals.