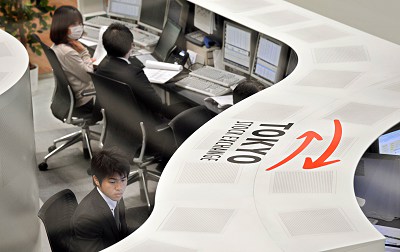 Tokyo stocks down 0.94pc by break

Chinese stocks plunged on Tuesday morning, despite the government’s renewed pledge of continued support, with the Shanghai Composite index down 3.31 percent.

Global equity markets retreated on Monday after Shanghai plummeted 8.48 percent on fears the Chinese government will pull back on support measures that have provided stability for the past few weeks.

And analysts said the latest gyrations in China could affect Federal Reserve policymakers’ views when they discuss when to hike interest rates during their latest meeting this week.

“The return of market volatility in China will be a significant discussion point at the US Fed. There is a lot of global weakness and significant external risk.”

Suntory Beverage and Food fell 0.18 percent to 5,320 yen following a report that its parent firm, Suntory Holdings, was considering a public listing as early as 2018.