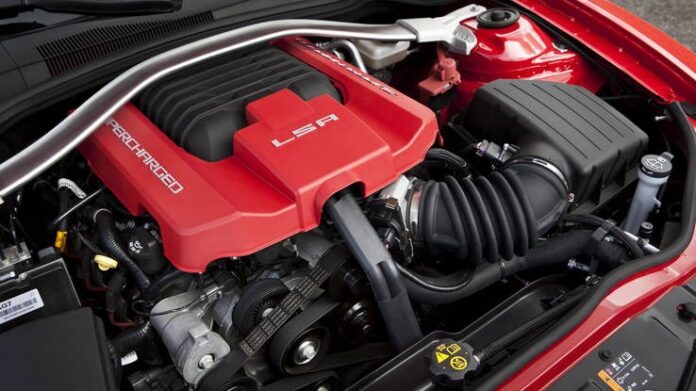 ROAD TEST EDITOR JAKE LINGEMAN: So cheap! I’ve been driving a lot of expensive machinery lately, leading me to debate the merits of $ 100,000-$ 200,000 super- and sports cars, but getting back in this Camaro for a fourth or fifth time? It reminds me why I love America. Just less than 600 hp for just less than $ 60K — are you kidding me?

It can be driven all day long, too. In comfort mode, it just bumbles along, absorbing all but the biggest of potholes. I drove one of our racing guys home and even he remarked on how comfortable it is over our crumbling roads. Even in sport mode, it’s still completely livable for an enthusiast.

It steps on the scales with more than 4,000 pounds, which is obviously a lot. Gas mileage isn’t great, but that mass is what helps it feel so smooth and planted on the road.

Of course, if you want to lighten things up a bit, just smash the throttle and this car will slip-n-slide up into third gear. Steering on the throttle is easy, and a quick retraction brings everything back in line. The brakes feel great for standard steelies.

So the Camaro comes with some inherent problems, most notably the visibility, which is nil. And being this cheap gets you stuff like peeling door sill stickers and panels that aren’t quite simpatico. But it’s the engine that everyone really cares about, the rest is just window (sill) dressing. Pardon the pun. This car in particular has been thrashed by journalists for a few thousand miles, so we’ll give it a little break.

The 6.2-liter V8 sounds awesome with a deep rumble in the low revs and a backfiring scream higher in the range. Power with the supercharger is overwhelming from upshift to upshift. The nose does get off the ground a bit, until your acceleration slows and the whole car planes out. The clutch pedal and shifter are just about perfect in weight and throw. I personally still like the Mustang’s “feel” more, but that’s me. Steering is easy at slow speeds, but seems to tighten up in sportier modes or at higher speeds. I always love suede/alcantara trim.

People still gawk at this thing, even though it’s a few years old. I love the black rim/black trim edition, no matter the exterior color.

It seems Camaro has something for everyone, if you include this ZL1. We haven’t heard about upgraded trims for the 2016 model, but they’re surely on their way. I’ll be excited to see if Chevy can do better than this, at this price, or if anyone can, for that matter. 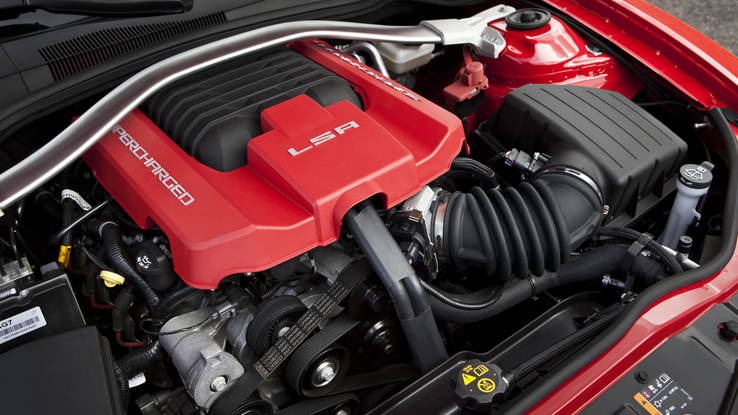 The ZL1 has a : 6.2-liter supercharged OHV V8 engine. Photo by Chevrolet

ASSOCIATE EDITOR GRAHAM KOZAK: With the Gen 6 Camaro on the way, this is likely one of the last times the fifth-gen ZL1 will rotate through our test fleet. I’m not the world’s biggest Camaro fanboy, but I’m always pleasantly surprised at how much I end up enjoying this GM pony car’s most muscular incarnation and how frustrating its shortcomings are.

Certainly, what it does well, it really nails. Yep, magnetic ride suspension is still good, softening the blow of road imperfections in “tour” and firming up noticeably — but never to the point of harshness — in “sport.” Yep, the multimode traction management system is still there to get your back when the pavement is slick; with no electric nannies and on cool tires, even a coating of early-morning dew provides enough lubrication to break those wide rear tires loose.

And yep, the spotlight is still on the 6.2-liter supercharged V8. I’d put it in a boat, which, oddly enough, is just about the highest praise I can think of giving any motor. It sounds great at its slightly cammy idle, and it’s immensely enjoyable to charge down an on-ramp in second gear and just wind it up to near redline before leisurely grabbing the next gear. On the other hand, giving it a little throttle, dropping into gear and letting the LSA’s instant and ample torque rip you forward from a dead stop simply does not get old.

If only I could say that about the rest of the car.

It’s not so much the exterior. Time and time again, I’ll tell myself I’m not a huge fan of the look of the fifth-gen Camaro … but soon enough, I’ll catch myself gazing at it parked across the street and thinking, damn, that thing does look pretty mean. That’s a good thing, because the new one isn’t a huge departure stylistically. I wish it were a little smaller and less massive — and lo! It looks like 2016 will shed some bulk as well.

No, what gets me is the interior quality. It’s never been terribly impressive, and it’s looking more and more dated and cheap as time goes on. Even Fiat-Chrysler has been able to keep their aging fleet of muscle feeling more or less fresh thanks to some carefully chosen interior upgrades; alcantara shift knob aside, this feels like the bad old days of ’09.

There’s lots of gray plastic everywhere you look. ZL1-specific doorsill plates are metallic stickers, as Jake pointed out, and they’re starting to peel a bit at the edges — this is on a brand-new car, and one that seems to be positioned as a future collectable, no less. Granted, none of this has hurt Chevy too much in the past (look at what the Corvette faithful put up with before the arrival of the C7). But it’s a huge knock against what is a truly impressive piece of engineering, and a big reason import fans have been able to justifiably ding American performance offerings for years now.

I know the General can do better; the GMC Canyon, for example has some genuinely nice metal trim bits scattered here and there — and that’s a pickup truck, which shouldn’t feel nicer than an expensive flagship performance offering. Perhaps it just didn’t make any sense to give this car an update with a new model on the way.

True fans will be able to look past these flaws, and they’ll enjoy a truly invigorating motor and a refined ride for their efforts. But I can’t see anyone else climbing onboard the SS Camaro with the promise of something newer and, hopefully, better just over the horizon. 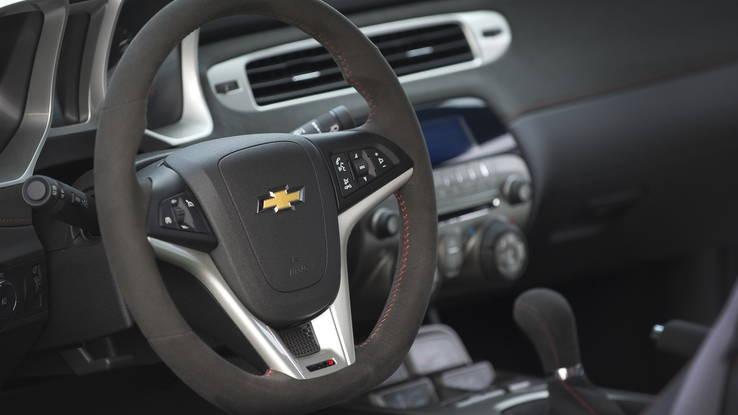