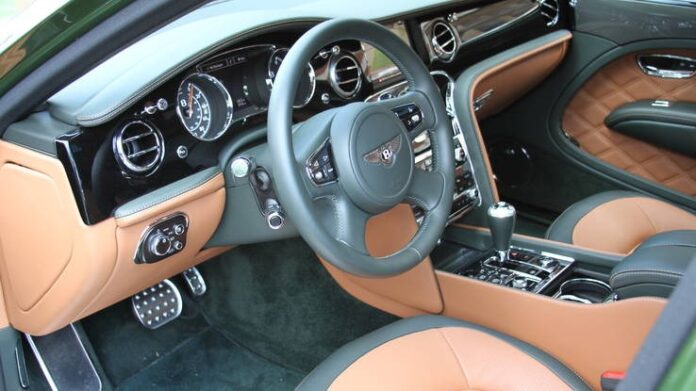 2015 Bentley Mulsanne Speed review notes: When only a motorcar will do

Get a driver; you’re going to want one

DIGITAL EDITOR ANDREW STOY: Now this, kids, is a motorcar.

Very few conveyances deserve that moniker; the Mulsanne Speed defines it. It’s insanely heavy because all the metal and wood inside is actually metal and wood. That stuff’s heavy, but rather than compromise on the material quality, Bentley simply adds power and torque — 811 lb-ft of the stuff from a massive, force-fed pushrod engine, the design of which is older than I am. The carbon emissions from my drive home raised the afternoon temperature in Detroit by two degrees.

The whole thing is completely unnecessary, bordering on immoral, but it’s the best motorcar I’ve ever experienced.

All that said, it’s not a particularly fun car to drive. Despite its Peterbilt torque numbers, the Mulsanne is ridiculously large and heavy, and the suspension (even in, ahem, “sport mode”) wallows during steering and braking. Don’t get me wrong: Stomping the pedal and hearing the 6-3/4-liter V8 inhale 747-at-takeoff volumes of air as you’re catapulted forward is highly satisfying. It’s the turning and braking part that’s less fun. Braking in particular, despite rotors the size of Ferris wheels, is an unsettling affair as the Mulsanne pitches forward and wobbles a bit on its soft suspension. You do not want to follow too closely in traffic; that’s totally chav anyway — you should be motoring along serenely, indifferent to those behind.

Scratch that. You shouldn’t be driving at all. You should be sitting in back, getting a massage from the reclining leather thrones (really the best descriptor) or sipping champagne from a crystal flute perched atop the motorized retractable leather-covered tray table while watching some sort of subtitled film on the headrest screen.

That’s the irony: The Mulsanne Speed owner probably isn’t the same as the Mulsanne Speed driver, so braking behavior and the like become largely irrelevant. The right rear seat is where you’d find me. 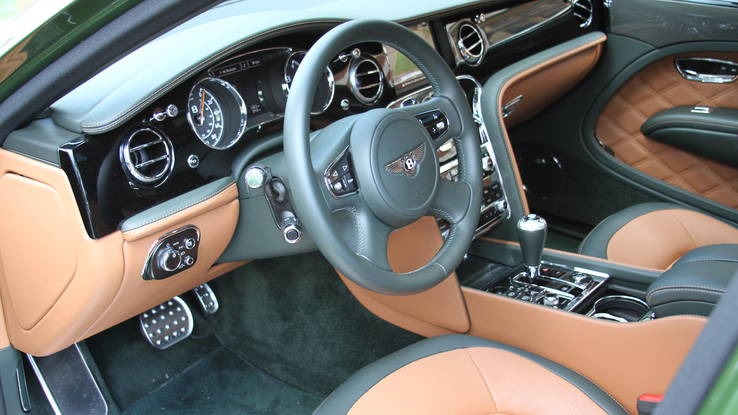 EDITOR WES RAYNAL: Mr. Stoy’s first sentence sums up this car perfectly. As do his next several.

I love this car, and as we’ve pointed out before, it’s damned near improper to do so. Don’t care.

811 lb-ft! My goodness. No wonder it feels like a jet on take off. According to my half-second interweb research, only the Bugatti Veyron has more torque.

The beast weighs as much as a Chevy Tahoe, and I suspect that is why I’ve read often that the car doesn’t “handle well.” I counter that slightly, submitting if you’re gentle on initial throttle and steering input and use the brakes gently, everything is rosy. The car’s size and weight and silence on the road also mean you’re often going quite a bit faster than you thought. And the car is fast, make no mistake. Sporty? No. But still a pleasure to drive. It’s an event.

The interior is exquisite, as one would expect for this price. If it looks like wood or metal, it is. The seats are more like thrones, as they should be.

By the way, think that price is high? Of course it is. I just returned from visiting Bentley and have a couple stats: 400 and some people take 300 hours to craft each Mulsanne. That costs money. Bentley’s website allows one to pick from more than 100 color options. That costs $ $ $ too.

The thing about the Mulsanne is that it’s a car that goes like stink, so it’s fun in that sense, but I imagine many will have the owners chilling in the back. In other words, it makes no sense whatsoever. And I mean that as a compliment. 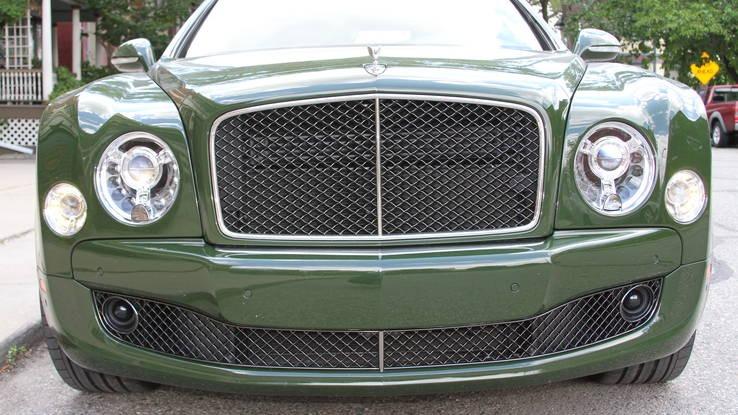 ROAD TEST EDITOR JAKE LINGEMAN: This Mulsanne Speed makes you a star wherever you drive it. It opens doors. I started the weekend at the horse track in Hazel Park, Mich. I pulled up to the “no parking” area where my friends were hanging out and the whole crowd turned their collective heads.

It’s gotta be the color. This drab British racing green, I also heard it called money green, just draws eyes. But even without that, this car has a presence. The squared-off front end looks like it has all the aerodynamic properties of a flying brick, and at 18.3 feet, it takes a long time to clear a corner. It’s taller than expected, too. You can almost rest your elbow on the hood while standing upright.

It’s not the easiest car to drive, at least until you get used to it. It’s more than 7 feet wide and on some of those two lane highways out by my cottage, it felt a little cramped on the road, especially when a dually truck rolls by with a horse trailer. Backing out of a parking spot takes some patience too, but the backup camera helps with the moving graphics that show you where you’re heading. I raised the seat up a few inches which helped with the visibility. Normally I like sitting low in the car.

It’s not a rocket, but the thrust is impressive when you consider the 6,000-pound curb weight. And it does keep pulling well past triple digits. On the expressway, everything is passable, just watch out because 95 mph feels no different from 65 mph. This car is that smooth and quiet.

It’ll get you in trouble too, because it takes a decent amount of pavement to slow this battleship down. The brakes don’t start grabbing until about 5 inches down, necessitating a panicked jab at the left pedal to finally bring this cruiser to a halt. It’s a bit unsettling with $ 400,000 wrapped around you.

The 6.75-liter V8 isn’t loud. Its smoothness and quiet startup reminded me of a V12. A medium-to-hard press on the pedal will get you going, but it does surge through the gears pretty quickly, until it settles in at speed. Sport mode tightens up the steering and lowers the car a few inches, which helps a bit around curvy roads. “B” mode apparently gives you the best of speed and comfort, softening the suspension but keeping the throttle alert. I left it in that mode most of the weekend.

The traction control kicks in with anything harder than a medium press of the pedal, and on dirt roads, you may as well forget it. I have about 2 miles of gravel before my cottage and that light just kept flickering. The road commission must have recently added more rocks too, because I was sliding all over the place. I trusted that if I got too out of shape, the Bentley would kick me back in line. Never happened, though. Here’s a good point to mention the wheel wells of the Mulsanne, which have some sort of carpet or Astroturf in there to quiet any rocks hitting the body.

The steering wheel has a medium weight in comfort mode and is almost too heavy in sport. Whipping it past 180 degrees requires a second hand. Granted, I normally like weight behind the wheel, but this car already feels heavy and without a lot of feel, no reason to add to that.

So, the interior is probably the best I’ve ever seen. I love the dark green leather with beige accent stitching and I love where the beige and green materials come together. The perforated, cooled seats look amazing, as does the perforated roof. That’s something you don’t see every day. The metal knurled vent pulls feel expensive, and so do the vents. As for the massaging seats, they’re not as good as Mercedes’.

This is why the terrorists hate us, by the way.

Oh, and where the hell is the USB port? All I see is that VW proprietary cord, and I couldn’t even find one that fits my phone. How hard is it to program the radio to read the USB port like everyone else?! In today’s world, there should be six in there. While we’re complaining, the chrome around the gear selector is too much. I like the look, but at any time between noon and 2 p.m., you get blasted in the face with the sun’s reflection. I had to block it with my elbow for a few hours. Lastly, all that dark trim just absorbs the sun’s heat. After it sat out in my driveway for a few hours, I could feel the heat radiating off the window sill and dashboard, right into my face. It took the AC a while to cool it off.

The back seat is more of the same luxury with heating, cooling and massaging seats. That entertainment package, $ 28,000 or so, gets you two laptops in the back of the front seats, with another screen in the headrests, and tables to work on. It also has a remote, which my friends loved, changing the radio station at every turn.

I also brought the car to Lingenfelter’s Cars and Coffee out in Wixom, Mich. But it wasn’t a regular C&C day; it was a fifth-gen Camaro meet up. I thought I might have to park off site, but nope, I was welcomed with open arms, and even got a spot in front after a few workers scurried to move some cones. With the Mulsanne, the world is your oyster.

It drew a crowd, most wanted to know how much. And everyone remarked on the color. It was the same at my cottage; it literally drew a crowd of about 30 people. I thought it might be too show-off-y, but everyone enjoyed seeing it. I gave a few rides.

You can’t really compare this to the Maybach, it’s almost twice as much. I guess it would be up there with the Rolls-Royce Phantom, though I’ve never driven the sedan version. It does look like its own thing though, as opposed to the ’Bach, which looks like an S-class. A few people stopped me and took pictures at the gas station too.

Like I said, it opens doors and draws a crowd. 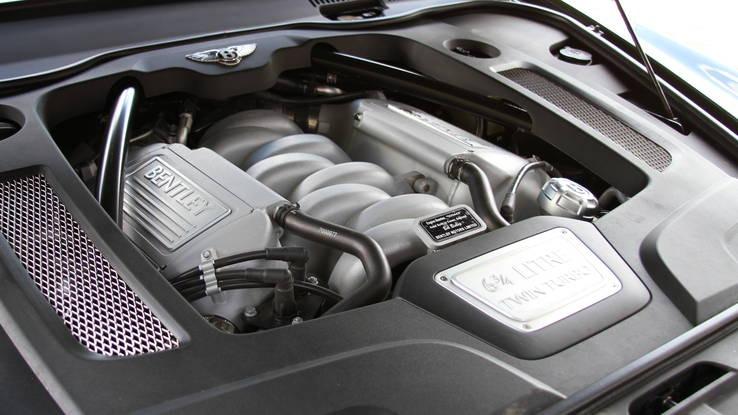