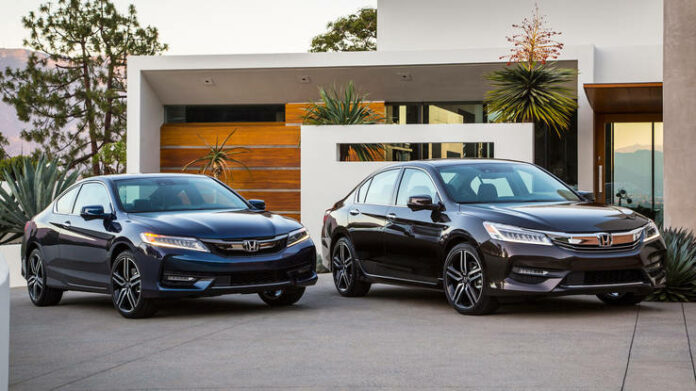 2016 Honda Accord first drive: If it’s an appliance, it’s a damn good one

Yes, there are updates for the new model year, and some trims see modest price increases (see the full guide down below), but unless you’re doing back-to-back test runs, you probably won’t notice the revised suspension damping or new steering-response logic.

Output remains the same for both engines: 185 hp and 181 lb-ft from the 2.4-liter inline-four and 278 hp and 252 lb-ft from the 3.5-liter V6. On the I4, however, a series of engineering improvements — plus aero-boosting exterior changes — have yielded a 1-mpg highway fuel economy improvement. So there’s that. Transmission options are carried over as well. There is a six-speed manual, which an enlightened 2 or 3 percent of buyers will select, and a CVT, which is not totally punishing to drive.

The exterior, which we liked already, gets the really noticeable visual changes: A revised front fascia, massaged tail end and big 19-inch wheels for Sport and Touring trims.

But Honda’s focus seems to have been on technology. Inside, the infotainment system adds Apple CarPlay and Android Auto functionality. Both systems come standard on EX, EX-L and Touring trims; in addition to streamlining music streaming, giving your car the ability to read you your text messages and bringing Apple and Android’s powerful voice-recognition systems into the cockpit, this also means you won’t have to opt for the Navi package to get in-car navigation (your smartphone’s built-in GPS fills the gap).

Sorry, Accord Sport buyers. You have to navigate the old-fashioned way, as CarPlay and Android Auto aren’t available for lower trims. On the other hand, Honda Sensing — the automaker’s suite of safety features including lane departure warning and collision-mitigating braking — is now an option for all trim levels. 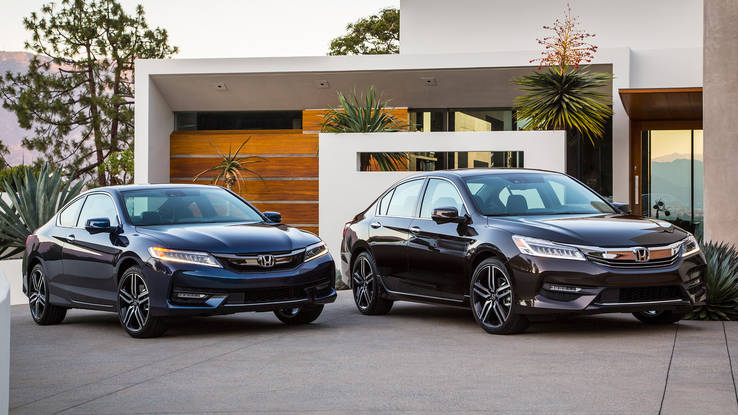 The 2016 Accord coupe and sedan get mild facelifts, but they were both handsome cars to begin with. Photo by Honda

Honda rolled out the 2016 Accord at something it called the Dream Garage event — basically a chance to give its non-automotive side some love. Seemingly everything Honda touches, save for its upcoming jet, was represented. During our two days in San Marcos, Calif., we:

– rode the UNI-CUB — we’re getting better!

– got to know Miimo, the adorable robotic lawnmower

Oh, right, we drove the ’16 Accord, too — a few versions, actually. To give us a chance to get acquainted with the car, Honda plotted a lovely drive route; the roads were, by our topographically challenged Midwestern standards, quite spectacular. They were also clogged with slow-moving traffic and an improbable number of landscaping service trucks, giving us ample time to play with Apple CarPlay and Android Auto. Both work precisely as advertised — when they say it’s plug-and-play, they mean it. Our co-driver, who had never used CarPlay before, hooked up his iPhone and was sending and receiving text messages to colleagues in seconds.

That’s the trouble with CarPlay: As soon as people realize they can reach you while you’re driving, they won’t hesitate. We savor our time behind the wheel; in a world rife with disharmony and distraction, it forces us to experience some rare, focused serenity. Bringing Siri into that semi-sacred sphere is, to us, not really a step forward.

So that’s another great reason to get the charming Accord Sport sedan; it doesn’t have the CarPlay or Android Auto option. But we suppose the music streaming services and navigation features are nice to have. 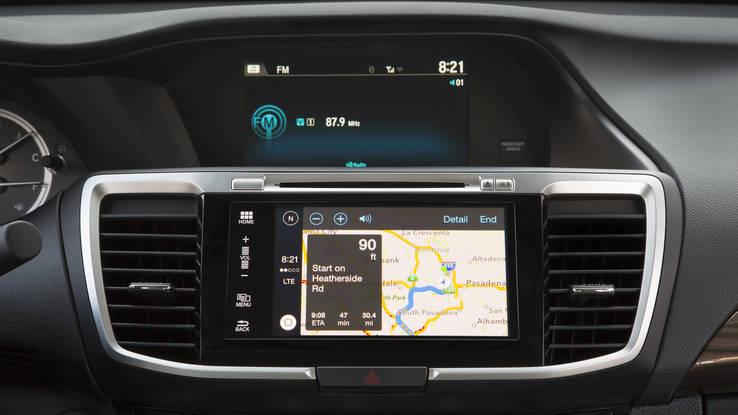 Apple CarPlay and Android Auto bring the power of your smartphone into your Accord’s cockpit, which is both good and bad. Photo by Honda

In rolling out the 2016 Accord at its Dream Garage extravaganza, Honda was practically daring us to compare its volume-selling midsize sedan/coupe to the non-automotive appliances it also builds.

So we’ll go ahead and do it: the 2016 Accord is an appliance. A really, really good appliance. We truly mean that as a compliment. In fact, we’re reconsidering using “appliance” as a derogatory term when it comes to cars.

It took some time messing around with power equipment for us to see the light. Chopping up soil behind a shiny red FRC800, we were reminded of a picture of Soichiro Honda doing the same thing with his company’s first tiller, the F150. We’re talking about a guy who wanted nothing more than to build racing cars and motorcycles, grinning like crazy at the controls of an agricultural implement.

And that’s when it hit us: Well-engineered machines, even ones with really boring jobs to do — like, say, tilling a field or tackling your morning commute — can bring die-hard gearheads a lot of joy. We appreciate them. Just ask someone about their Honda lawnmower. Actually, don’t; you’ll never get them to shut up about it.

So it is with the Accord. It’s a car designed to cheerfully trudge through life’s inanities without complaint, day in and day out. And the 2016 model does everything just a little bit better than its predecessor. It rides slightly better. It’s got more connectivity, if that’s what you’re after. The coupe remains the best-looking car in its class, and the Sport sedan is fun to wind up when the roads open up.

Whether or not you think you want the Accord, you’ve got to respect it — and at some point, maybe 50,000 or 100,000 headache-free miles into the deal, we bet you’ll have come to really appreciate it.