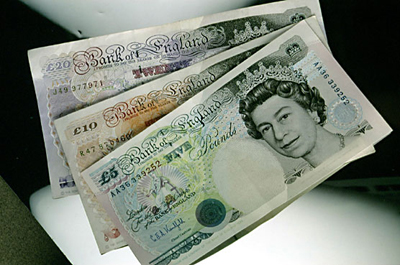 LONDON: Sterling edged towards a three-week low versus the dollar on Monday, after its weakest week in three months against the US currency as investors pushed back their expectations of when UK interest rates would rise.

Minutes from the Bank of England’s latest monetary policy committee meeting released on Thursday showed just one policymaker voted for an immediate increase in interest rates. Many in the market had speculated that at least two MPC members would vote for a hike.

But while expectations for BoE interest rate increases were consequently pushed back, US jobs data published on Friday firmed up bets on a rate hike by the US Federal Reserve by the end of the year, perhaps as soon as September.

That helped the dollar reach a four-month high against a basket of currencies and pushed the pound to a three-week low of $ 1.5424. On Monday sterling traded close to that trough at $ 1.5467, down 0.2 percent on the day.

“This time however it was notable that UK rate expectations didn’t budge, and in fact sterling weakened against the dollar. This reinforces my view that sterling may well be weak until investors regain confidence that the BoE is likely to raise rates in the foreseeable future.”

The BoE warned last week that sterling’s strength, with weak energy prices, would keep inflation subdued well into next year, though sterling’s rise would not take away the need for future rate hikes.

The next major UK data release for currency traders will be Wednesday’s labour market figures including earnings, which are closely watched by the Bank of England.

“We still see room for longer-term appreciation but would wait for this week’s labour data to confirm our bullish position,” wrote Citi strategist Josh O’Byrne.