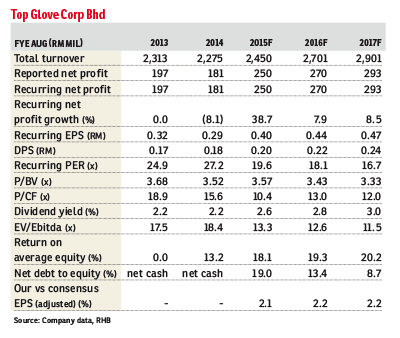 Downgrade to neutral with a revised target price (TP) of RM8.17: We recently hosted Top Glove Corp at a corporate luncheon. While its prospects remain intact, we believe that the counter’s 75% year-to-date (YTD) gain implies that much of the positive news has been priced in.

Top Glove revealed that demand for nitrile gloves has improved since the fourth quarter of 2014 (4Q14).

Its lead time (the duration between the placement and delivery of orders) for nitrile gloves in 1Q15 has risen to 50 to 60 days from 40 to 50 days in 4Q14, which pointed to a higher demand intensity.

During 1Q15, the company recorded a 14.7% quarter-on-quarter (q-o-q) growth in nitrile glove volume, outpacing the industry volume growth average of 7.6%. As a proportion of Malaysia’s total rubber glove exports, nitrile glove exports grew to 56% in 1Q15 from 51% in 4Q14.

We are pleasantly surprised at the results of Top Glove’s automation drive. The management does not expect the absorption of the recent hike in gas tariff to impact margins as it believes that the rewards from the automation drive would more than offset the rise in fuel costs. As such, it expects margin expansion to be sustainable going forward.

Top Glove’s earnings before interest and taxation margin expanded to 15.4% in 3Q of financial year 2015 (3QFY15) (August), from 12.9% in 2QFY15. The company is currently sitting on RM221.2 million in cash, and is on the lookout for opportunities that could add value to its existing operations such as ceramic glove formers or packaging materials.

We adjust our assumptions and revise up our FY15 to FY17 estimates by 1% to 4% after updating our US dollar foreign exchange assumption to RM3.75 (from RM3.50) to account for the weaker ringgit.

The downside risk to our recommendation is heightened competition within the industry that may compress margins, while upside risks include a further weakening of the ringgit.

While Top Glove’s growth prospects are intact, with a 17.5% earnings per share compound annual growth rate for FY15 forecast (F) to FY17F, we believe that this is already reflected in the price as the stock has gained by 75% YTD.

Top Glove trades at a 18.2 times FY16 price-earnings ratio (PER), slightly above its historical +2 standard deviation trading band of 18.1 times PER. We reiterate our “neutral” call, with a revised discounted cash flow-based TP of RM8.17, implying a 18.8 times FY16 PER. — RHB Research, Aug 7.

This article first appeared in digitaledge Daily, on August 10, 2015.