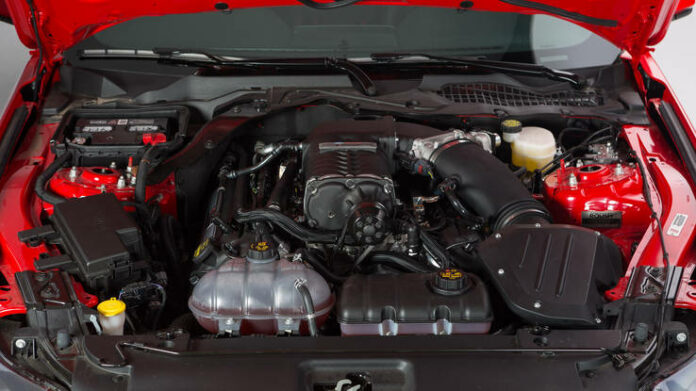 The 2015 Roush Stage 3 Mustang is Ford fanboys’ answer to their Mopar buddies with Challenger Hellcats in their garages. Sure, the raw horsepower in the Hellcat is a bit more substantial, but when talk turns to power-to-weight ratios, not to mention road course racing, the advantage goes to the Ford team.

Roush Performance in Plymouth, Mich., offered up one of its top-of-the-line Stage 3 Mustangs for a road test — not just for sheer performance but also to show off its new Active Exhaust setup, which allows owners to tune the car’s exhaust sound through a smartphone app. That might seem like overkill, but I found a bunch of ways to make it useful, including tuning out drone at my chosen speed of 84 mph.

But first, the basics: The company will turn any stock Mustang into a Roush with one of four packages. The RS is the most basic, adding a handful of body pieces to the V6 model. Stage 1 adds a Roush exhaust system (prepped for Active Exhaust), body parts and a few interior bits to the EcoBoost Mustang. Stage 2 adds 20-inch wheels to the Stage 1 upgrades. 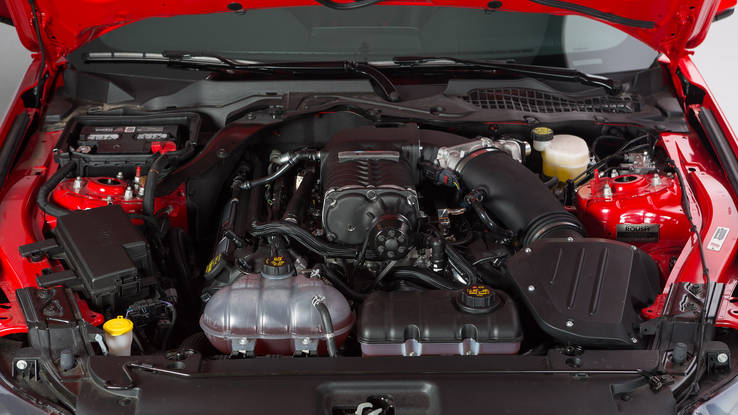 Roush Stage 3 injects steroids into the 5.0 Coyote with a 2.3-liter TVS supercharger. That bumps output from 435 hp to 670 hp and torque from 400 lb-ft to 545. The Roush exhaust, prepped for Active, is included, along with a one-way coilover suspension system with adjustable height. Stage 3 also gets extreme-duty halfshafts to handle all the extra power. Like the rest, the Stage 3 gets a dozen or so upgraded body pieces. Our tester had a couple extra options, including the tunable exhaust, Roush leather seats and a three-way coilover suspension that works with the Mustang’s different drive modes.

Roush says that’s the key. All of its parts play well with Ford’s because the two companies are “partners in performance.” Roush considers itself a steward to the Ford name. The company isn’t owned by the Blue Oval, but it does get access to the new Mustangs as soon as possible. This allows Roush to have its own cars ready to go as the stock ‘Stangs hit the dealership. These complete cars, as well as parts, can be purchased from any Roush certified dealer.

The Stage 3 Mustang feels like a lightweight compared to certain 707-hp competitors. It tips the scales at 3,892 pounds — 547 pounds lighter than the Challenger Hellcat and 228 pounds lighter than the Camaro ZL1. Add Ford’s new independent suspension and Roush’s three-way adjustable setup, and the Mustang channels Muhammad Ali’s famous “Float like a butterfly, sting like a bee” mantra.

Roush’s chassis setups are about one notch stiffer than Ford’s. Comfort is like sport, sport is track and track is extra hard. I kept it in sport for most of my drive, and that was compliant enough for our generally crappy roads.

Directional changes are quick without any rocking back and forth, and hard launches are the same. No big nose lifts and a very minimal amount of dive on braking. Roush’s upgrades also work with the launch-control system. As with the stock Mustang, the steering weight can be adjusted with rocker switches on the dash. Effort is good, but road feel could be a little better — that’s more on Ford. It’s way more composed than the previous-gen Mustang over broken pavement, mostly absorbing the road shocks and keeping them from entering the cabin.

The six-speed shifter features a shiny Roush ball on top. Shifting action is good, though there’s a little notchiness in the middle. Clutch effort is just right, and the pedals are close enough for good heel-toe downshifts.

The 5.0-liter seems positively psychotic with the additional 235 thoroughbreds under the hood. Power comes on strong early, overpowering the traction control if the wheel is cranked, and doesn’t really stop until it gets near the redline. Gear changes are greeted with a backfire from the pipes and a little bit of wheelspin when you’re hard into the gas. If the steering wheel is straight, and your foot is to the floor, it’ll wiggle a bit, sending power back and forth between the rear wheels. I did crank the wheel and hit the gas in second gear at one point, which sent the tail out more than 45 degrees before the computers could get it back in line. So watch out for that; it’ll attract a lot of (mostly) unwanted attention. 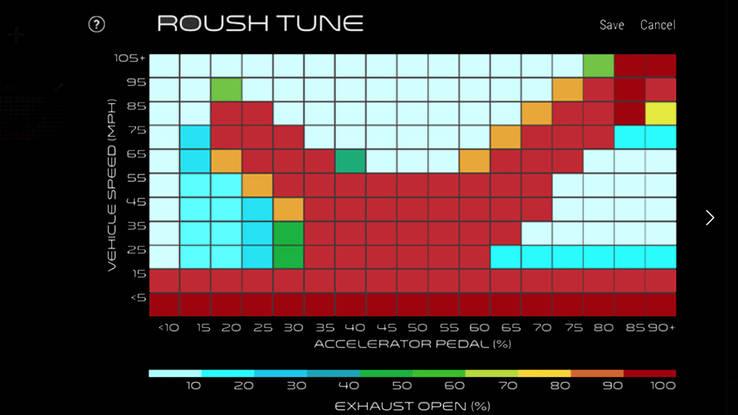 Roush’s Active Exhaust can be tuned through an app on your iPhone. Use the spreadsheet, pick a speed and throttle position, hold until red. The exhaust now opens up at that point.

And you’ll already be swimming in it — attention, that is — if you choose the Active Exhaust. The standard setup has a dial for comfort, sport and track. Those are three custom tunes for what most people like in their tailpipe sound. But if you want to get a little more creative, the Active Exhaust is right up your alley. The system can be tuned through a smartphone app that is wirelessly connected to the car through a small dongle on the OBDII port. Once connected, owners can set the exhaust loudness at any speed or throttle position. It does this with two flaps in the pipes, which can open or close depending on need. You could tune it just to rumble at idle, or at full throttle. You can have it quiet up to expressway speed, and then open it up at 70 mph. We tuned it to be loud up to 70 mph and then quiet after that. The possibilities are infinite. Unlike the sweet-sounding Jaguar F-Type, the Roush, when in quiet mode, stays quiet.

Right now the system only works with Apple’s iPhone, but Android support is coming. Roush execs were also talking about a geofencing function that might come in the future. That would sense when you’re getting near your house and quiet the car down automatically — good for angry neighbors.

Cruising down the expressway in track exhaust mode, the car sounds a lot like a Harley-Davidson at full bore. Passing cars will notice, cops on the overpass will notice, everyone will notice. It mostly drowns out the enjoyable whine of the supercharger until you get high into the rev range and let off the throttle.

The Active Exhaust system can be purchased a la carte for $ 1,875 and can be retrofitted to any Mustang with a Roush exhaust. It’s actually a very easy home install with only a few parts. The control unit sits in the trunk and doesn’t take up much space.

The interior is mostly Ford stuff with a few badges and plaques thrown in for good measure. Roush reskins the seats with its own leather — a nice touch, but probably a $ 1,795 option we’d skip. It does work well with Ford’s cooling seats, which are nearly instantaneous in their operation. Visibility is a little worse than the stock Mustang due to the quarter windows that are covered by decorative scoops.

Car buying probably scares the enthusiast less than the average customer. We generally know what we want, we know what we’d like to pay, we know the specs and we even know what options to …

If you’re a Ford guy and want a Mustang that’ll put the competition on notice, then absolutely yes. The Stage 3 package tacks $ 21,995 onto the price of a Mustang GT Premium, which is about $ 38K. That means that for about $ 60,000, before options, you have a street- and track-ready Mustang that will blow the doors off almost anything on the street. The only problem? It looks too fast.

Several people stopped me on the street and asked me about the car and whether or not it was factory built. The hood scoop, the hockey sticks on the side and those custom wheels will certainly alert anyone looking that this is something special. And if they don’t see it, they’ll definitely hear it coming, especially when the exhaust is turned up to 11.

Now, if you can get those Hellcats to meet you at a racetrack …