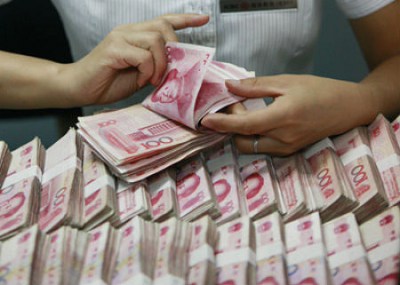 TOKYO: Asia’s currencies came under pressure on Tuesday after China unexpectedly devalued its yuan currency in the face of weakening growth, driving the dollar higher.

China’s central bank announced a near two percent drop in the value of its yuan against the US dollar, the biggest fall since the currency was unpegged from the greenback in 2005.

The surprise move sent ripples through Asia’s currency markets, sending the Australian dollar — often seen as a proxy for the yuan — tumbling 1.16 percent to 73.28 US cents.

The US dollar also gained against the South Korean won and Indian rupee, but was marginally down against the Japanese yen, trading at 124.67 compared with 124.72 in New York on Monday.

The People’s Bank of China’s announcement “looks to be a move to a more open market policy,” Stephen Innes, a senior trader at OANDA, told Bloomberg News.

“Traders are looking for US dollar strength across the Asia region and pressure on all local currencies.”

The euro dipped after news that Greece has reached an agreement with its creditors on fiscal targets, leaving it on course for a bailout deal to avert an August 20 default.

The dollar fell overnight in New York against the euro as Fed officials gave fresh clues about the timing of the central bank’s rate hike.

After last Friday’s solid US jobs report for July, many analysts saw support for the Fed to raise its zero-level benchmark federal funds rate in September.

But Fed Vice Chairman Stanley Fischer tempered expectations on Monday when he said low inflation remains a concern for the world’s biggest economy.

Elsewhere, Atlanta Fed President Dennis Lockhart appeared to raise the prospect for a hike sooner rather than later.

“We are getting closer and closer to what feels like a healed state of the economy,” Lockhart said in prepared remarks to the Atlanta Press Club.

“I think the point of liftoff is close,” he said.