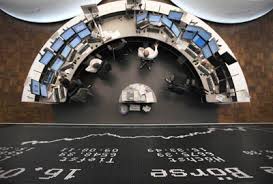 European stocks close down on China worries, despite Greek deal

LONDON: European stocks ended lower Tuesday after a surprise devaluation of the yuan battered key exporters to China such as auto and luxury goods groups, offsetting news of a technical agreement in Greece’s bailout deal.

“European equities on the back foot… in reaction to China’s currency devaluation and despite proximity to a Greek bailout deal,” said Mike van Dulken, head of research at Accendo Markets.

“While markets normally welcome any form of China stimulus with open arms, today’s move in the wake of truly awful weekend trade data is being interpreted as admission of growth slowing by even more than those rather questionable official statistics are to have us believe.”

China on Tuesday announced a sharply lower daily reference rate for the yuan against the US dollar, saying it was part of moves to make its exchange rate regime more market oriented.

The 1.86 percent cut was the largest since the yuan was unpegged from the greenback in 2005.

The devaluation weighed on several sectors, notably the auto and luxury goods markets that rely heavily on Chinese demand.

Burberry meanwhile slumped 4.42 percent to 1,536 pence in London. Miners also continued to fall under the pressure of weaker Chinese growth, with Glencore down 7.26 percent at 191 pence and BHP Billiton losing five percent to 1,148.50 pence.

The news by China overshadowed developments within the eurozone — notably that Greece has reached a technical deal on a multi-billion bailout with its international creditors after marathon talks.

“An agreement was reached,” a government source told AFP, with Finance Minister Euclid Tsakalotos briefly telling reporters that “one or two details” remained to be worked out during the day.

European officials later noted, however, that the accord was a “technical level agreement… What we don’t have is a political agreement.”

The deadline for Greece to reach an agreement on its third bailout is August 20, when it must repay 3.4 billion euros to the European Central Bank.

The widely-watched investor confidence index calculated by the ZEW economic institute sank 4.7 points to 25.0 points this month, ZEW said in a statement.