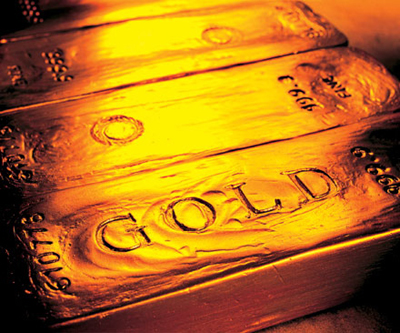 LONDON: Gold rose to a three-week high on Tuesday as the dollar reversed gains, global stocks fell and investors assessed the impact of China’s move to devalue its currency and prop up its economy.

Beijing allowed the yuan to fall to its lowest level in nearly three years after a run of poor economic data, with the central bank describing the move as a “one-off depreciation” of nearly 2 percent.

China’s rate decision triggered a sharp but short-lived retreat in gold to a session low of $ 1,093.25 an ounce.

“Gold is benefiting from fears that this is a new round of ‘currency war’,” Macquarie analyst Matthew Turner said, adding that the move increased uncertainties and risks about the global economy, which tends to be good for gold.

“Gold’s best moment this year came in the first few months when we saw various FX swings, lots of different central banks cutting interest rates or intervening in their monetary policy, so probably there is some element of that which has helped the rally from Monday continue a bit,” Turner said.

The metal had gained around 1 percent on Monday on dollar weakness, after comments from Federal Reserve officials raised uncertainties about a September rate hike. Friday’s lower-than-forecast US nonfarm payrolls in July also raised uncertainties over whether US rates will rise next month.

Analysts, however, do not expect China’s yuan devaluation to bolster gold’s value in the medium to long term, as this would have to be followed by a wider round of global devaluations.

“In the longer term, China’s devaluation is a slight headwind for gold, as it makes it a little bit more expensive from a Chinese perspective,” Julius Baer commodity analyst Warren Kreyzig said.

“It does not add to gold’s attractiveness in China and it doesn’t increase the safe-haven status.”

The euro hit a 1-1/2 week high against the dollar on Tuesday, while European and US shares retreated.

Investors have cut their exposure to non-interest-bearing bullion and raised their bets on the dollar on expectations that the Fed would lift rates this year for the first time since 2006.