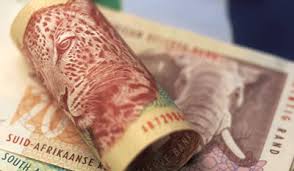 JOHANNESBURG: South Africa’s rand fell to its weakest against the dollar in nearly a week on Tuesday, dragged down by China’s decision to devalue the yuan after a string of poor economic data.

By 1530 GMT the unit had weakened 1.25 percent to 12.8150 , within touching distance of a 14-year low of 12.8300 as domestic and intentional factors weighed on the already fragile economy battered by chronic power shortages.

“It’s five weeks before the Fed meeting and by that stage the dollar will definitely be stronger than it is now.”

The US Federal Reserve is expected to lift interest rates for the first time in over six years in September, a move analysts say will draw investment flows away from riskier developing assets.

John Cairns of RMB noted that most “risk currencies” were down on the day, triggered by China’s central bank letting its currency fall nearly 2 percent to the dollar. On the domestic front, near daily power outages have hampered industrial output while the possibility of higher electricity tariffs have stoked already high inflation, adding pressure to the currency.

State power utility Eskom, struggling to meet demand in Africa’s most advanced economy, said on Tuesday profits had fallen by nearly half, also admitting that wrangles with coal suppliers were hurting generation.

President Jacob Zuma told a news conference that power outages were cutting 1 percentage point off growth. Yields on government bonds were mostly lower, with the issue due in 2026 shedding 0.5 basis points to 8.17 percent.