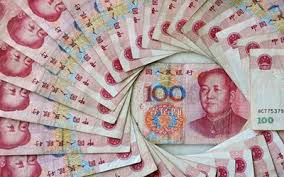 Yuan in biggest fall since 1994 after surprise devaluation

NEW YORK: The yuan suffered its biggest fall in more than two decades on Tuesday, hitting a three-year low after the Chinese central bank surprised markets by devaluing it by almost 2 percent, firing a broadside in what some analysts saw as a looming currency war.

The bank described the move as a “one-off depreciation” and billed it as free-market reform, but, after a run of weak Chinese data, with exports tumbling more than 8 percent in July, many economists said it was aimed at boosting the competitiveness of the world’s second-biggest economy.

Others pointed to China’s wish to be included in the International Monetary Fund’s Special Drawing Rights (SDR) basket of currencies as the main driver of the decision, arguing the size of the depreciation would not be enough to significantly help exporters.

“This was a bombshell to the markets overnight,” said Dean Popplewell, chief currency strategist at Oanda in Toronto. “The natural reaction is to try to sit back and decipher possible outcomes.”

The central bank said it would now base the yuan’s midpoint on market-makers’ quotes and the previous day’s closing price.

Spot yuan tumbled around 2 percent to as low as 6.3391, the weakest since September 2012 and the biggest drop since the currency was officially devalued in 1994.

The yuan extended losses in the offshore market, hitting its weakest in over 3-1/2 years at 6.3998, with traders saying that would mean more losses were in store for the onshore currency.

Analysts said the strength of the dollar against the yuan and the New Zealand and Australian dollars in the wake of the devaluation move could keep the Fed from hiking rates in September.

That uncertainty helped the euro gain against the dollar.

“There may be a new additional headwind for the Fed to potentially hurdle as they approach their September meeting,” said Brian Daingerfield, currency strategist at the Royal Bank of Scotland in Stamford, Connecticut.