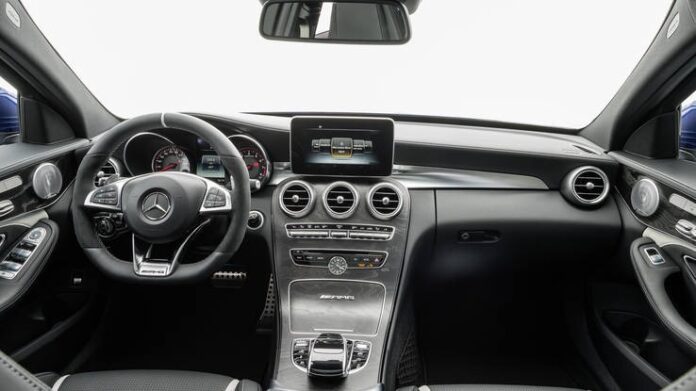 ROAD TEST EDITOR JAKE LINGEMAN: I’m torn. I’m torn between exhaust sounds. The Jaguar F-Type R was the new standard for hilarious and raucous tailpipe notes, but now I might be leaning toward this Merc V8. It sounds awesome in this car and awesome on the AMG GT S. It doesn’t crackle and backfire as much as the F-Type, but when it does it’s more meaningful. Either way, they both sound frickin’ great; this C63 is way more refined, though.

I love the look, except for the wheels; they almost look aftermarket or something. The big grille in front is cool, and from certain distances away it looks like an S-class. I did hear a few people comment that they didn’t like all the curves, but I am not one of them. The quad integrated exhaust is a nice touch.

It revs loudly on startup, which I also love, but settles into a relatively quiet grumble. The parking brake is always engaged when in park, but it releases automatically when you hit the gas. The rearview camera is nice, but visibility is pretty good anyway so it’s not necessary. While I’m talking about the screen, I’m not really a fan of the stuck-on look. I know a deployable screen is more expensive, but at near $ 100K, what’s the difference? It looks like you could rip this one right off the dash.

I do like the new touchpad interface, which completes the same functions as the jog dial did before. You can just swipe up for the upper options on the screen and swipe sideways to swap through them. It takes a minute to get used to, but I think it’s easier.

The seats are comfortable and supportive, but sit up a little too high. Even at the lowest setting, I felt like I was almost hitting the ceiling. They do have adjustable bolsters, which is always a nice bonus in apex carvers like this. The steering wheel has suede hand grips, a flat bottom and a mark at 12 o’clock — everything I like.

Put the pedal to the floor, and this car takes off after a miniscule hiccup. But it’s nothing like the bigger Merc SUVs, which takes a full beat before moving tires. Once this car gets going though, things come at you in a hurry. Turbo lag is minimal, but present. At certain rpm, it’s probably enough to upset the balance in a corner, but there’s a lot of time to feel it happening, both in the seat and wheel. Steering is heavy and direct, with no dead spot to speak of. Triple digits are easy to hit when getting on the expressway; shifts from the multiclutch come with a brrap and teeny drop in torque.

At speed, the C63 S doesn’t feel as fast as expected, so be careful. The good thing about this new AMG body is that it doesn’t stick out, so you might be able to fly under the radar a bit. The carbon brakes are expensive but can stop the car within a few inches of travel.

The C63 rode hard, maybe harder than even our long-term M3. Bumps and potholes were making me nervous, both because of the sound in the cabin and the jarring movement. If there’s any loose change or plastic, it will rattle over every expansion joint, which we suppose is just another reason to keep your car clean. The big rims and low-profile tires surely don’t help. Comfort mode calms it down a little, but not much. I feel like most of the other AMGs are softer, but I also suppose that makes sense because, like the M3, this is for the hardcore.

Our M3 was $ 85K; this is about $ 90,000. So they’re both in the right range. The S4 doesn’t really compare — it’s only 333 hp and costs $ 50K. The RS5 might be closer; that starts at about $ 70K and delivers 450 hp, but only has two doors. On the other end of the spectrum we have the Chevy SS, which is bigger, nearly as powerful and about half the cost. It will get diced up on track days though, by all three of those Germans. Finally, Jag and Alfa both have sports sedans in the pipeline, and both are saying all the right things. Any way you go, it’s going to be interesting to watch this market and see what shakes out. For now, I’m still sticking with the M3, barely, but I’d love some more challengers to change my mind. 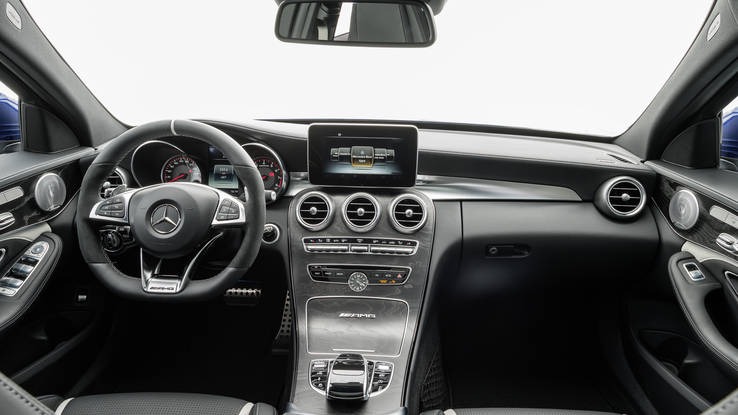 The Mercedes AMG C63 S has a 4.0-liter biturbo engine and is one of the most fuel-efficient eight-cylinder cars in the high-performance segment. Photo by Mercedes Benz

DIGITAL EDITOR ANDREW STOY: For once, I agree with Jake: The BMW still takes the win in my book. That said, Mercedes-AMG engineers obviously benchmarked the hell out of the M3, because this C63 S is a much more focused machine than the previous car. The soft edges and muscle-cruiser personality have been sliced away, leaving a hard-riding, quick-shifting premium sports sedan. Like the M car, the C63 S should be a ton of fun on a racetrack, but it’s punishing on regular roads, even in comfort mode. Again, this isn’t a problem for enthusiast buyers who want a street-legal DTM racer, but former AMG buyers who perhaps erred on the side of “meat cleaver” vs. “scalpel” may be surprised by the sacrifices required in a true track toy.

Add in the Audi RS5 (yes, a coupe, but still), and you finally have a trio of ultra-high-performance German machines that should perform within a few seconds of each other on your favorite local road course. Pick your poison and let the games begin. 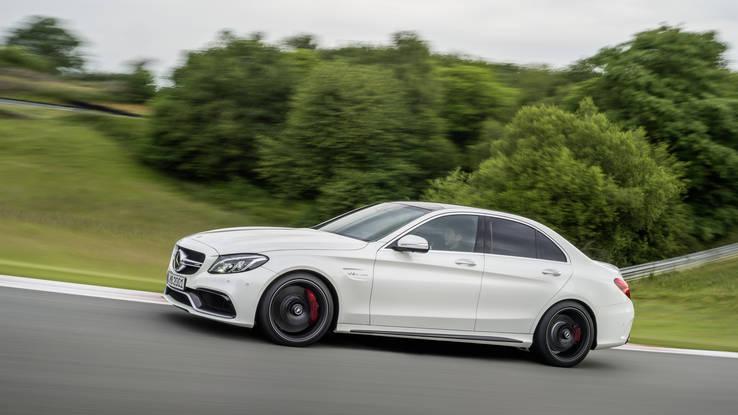 The Mercedes AMG C63 S has a 4.0-liter biturbo engine and is one of the most fuel-efficient eight-cylinder cars in the high-performance segment. Photo by Mercedes Benz