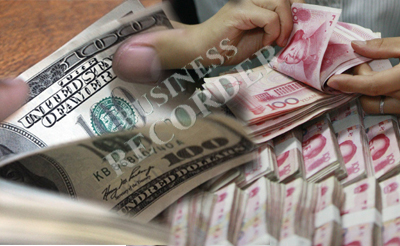 TOKYO: The dollar rose against a range of Asia-Pacific currencies on Wednesday after China cut the value of the yuan against the greenback for a second consecutive day.

In Tokyo morning trade, the dollar added to day-earlier gains on the Indonesian rupiah, Indian rupee and South Korean won, and bought 125.21 yen, up from 125.12 yen in New York and 124.89 yen in Asia on Tuesday.

The US unit also strengthened against the Australian dollar, which is often seen as a proxy for China’s yuan, with the Aussie at 72.55 US cents from 73.47 cents on Tuesday.

The daily fix that sets the value of the Chinese currency against the greenback was lowered by 1.62 percent to 6.3306 yuan, from 6.2298 on Tuesday, the People’s Bank of China said in a statement on its website

The move, a day after the unit was devalued by nearly two percent, was widely viewed as way to help boost exports as growth slows in the word’s second-largest economy.

“The government is focused on domestic issues rather than global implications at the moment, employing all the possible means to stabilise the economy,” Ronald Wan, chief executive at Partners Capital International in Hong Kong, told Bloomberg News.

Tuesday’s devaluation — the biggest since 2005 when China unpegged the yuan, also known as the renminbi (RMB) from the dollar — raised worries over the health of the world’s second-largest economy.

Observers warned the action cast into doubt when the US Federal Reserve will raise interest rates, expected as early as next month, and risked setting off a currency war where countries compete to devalue their units.

In other trading, the euro firmed after Greece reached a technical deal on a multi-billion bailout with its international creditors following marathon talks.