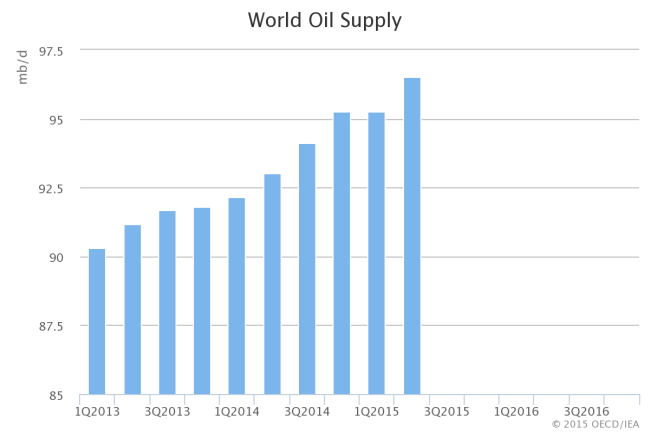 Crude oil just cracked $ 42 a barrel for the first time in over 6 years.

On Thursday after, West Texas Intermediate crude futures fell nearly 3% to below $ 42 a barrel in New York.

As prices continue to get hammered on excess supply, the oil market got even more bad news on that front this week.

On Tuesday, the 12-member oil cartel OPEC reported that its output rose to a three-year high in July. Iran was one of the biggest producers, and the country is expected to boost its output for exports when economic sanctions are lifted.

In the US, the latest data from the Energy Information Administration released Wednesday showed that crude inventories fell by 1.68 million barrels last week, a smaller-than-expected decline. Stockpiles remain at the highest levels for this time of year in at least 80 years.

Also on Wednesday, the International Energy Agency said in a monthly report that the global oil market would remain oversupplied through 2016, even though lower oil prices are expected to boost demand growth at the fastest pace in five years.

WTI fell into a bear market last month — defined as a 20% fall from recent highs — and is now down as much as 30% from highs reached in June. Compared to this time last year, WTI prices are down about 60%.

Here’s a chart showing the decline in crude on Thursday: