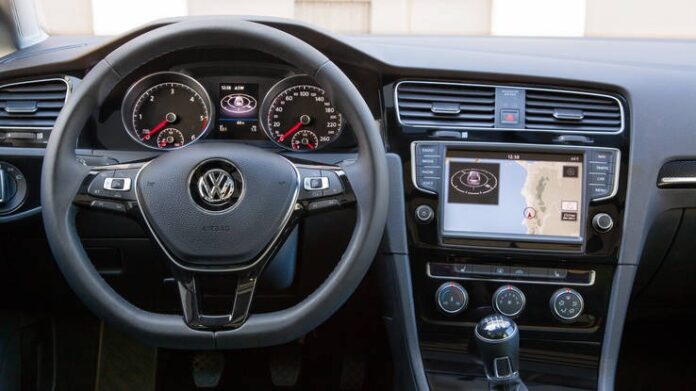 Everything we love; too bad it’s not brown

EDITOR WES RAYNAL: As with the other MQB platform-based Golfs I’ve driven, this is an excellent small car. The diesel runs about a $ 3K premium over a gas Golf wagon, and the SEL is the most expensive trim level with standard stuff such as touchscreen nav, dual-zone climate control, sunroof, rear camera, ambient lighting and so on. A base Golf diesel wagon runs about 24 grand and change, a good value in my opinion.

All the Golfs I’ve driven recently feel more mature now, more refined. The wagon looks better in person than in photos, and the class-cat interior is Audi-like in terms of build quality/fit and finish. Can’t think of another small car’s interior in the ballpark.

I like this engine/trans combination. The clutch operates perfectly for my tastes. There’s enough poke (above 3K rpm) and I routinely returned almost 40 mpg around town. No, it’s not a rocket. But as I said above, at 3,000/3,500 rpm it goes well and the diesel doesn’t make a lot of diesely racket. Besides, I’m not sure this car is about an exciting driving experience but more about practicality and efficiency.

The overall driving experience is refined, refined, refined. It feels solid and planted at all speeds. The chassis is stiff and the suspension soaks up nasty roads without the body rolling around. It makes for a rock-solid highway cruiser, one that drives quieter, and feels bigger and more luxurious out on the freeway. Eighty mph all day is no problem — stable, stable, stable. Like a German.

This diesel wagon is a yet another example of the whole new Golf line’s huge leap forward — it’s more refined and more fun. VW sales are up about 6,800 cars and SUVs so far this year, while Golf sales have nearly tripled — and deservedly so. Combining good ride/handling with practicality, good build quality and 40-plus mpg makes a winner in my book. This is simply a fine car. 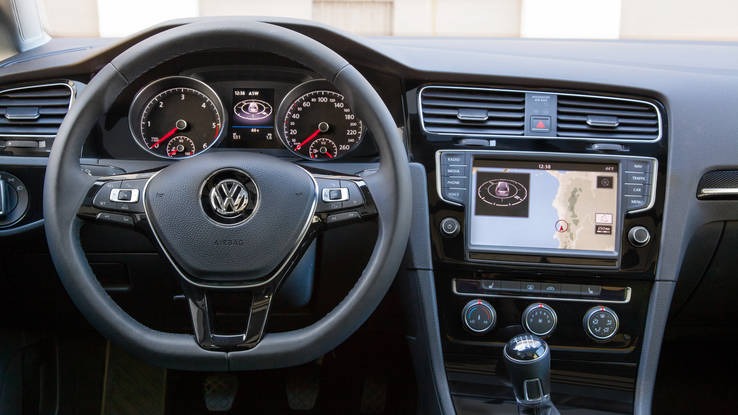 The six-speed manual transmission is standard. Photo by Volkswagen

DIGITAL EDITOR ANDREW STOY: Ah, old friends. We owned a Jetta (nee Golf) SportWagen TDI with a stick shift for a few years, and dropping into this 2015 model instantly brought back memories (not the least of which is how much different freshly cleaned press cars in July look vs. daily drivers in January).

Those memories are both good and indifferent — we never had a bad experience with our SportWagen TDI, but there are nuances and sacrifices that remain on the latest model. First and foremost, and the reason we no longer own ours, is that, despite the wagon configuration, this is a small car. When I’m in a position that allows me to comfortably work the clutch, there’s very little rear-seat legroom and my knee rests against the uncomfortable hard plastic center console. Shoulder room is tight with adults on board, and the cargo space, while it does have longroof flexibility, isn’t going to impress an Escape or CR-V owner.

The SportWagen also does without equipment common on much less expensive compacts: You won’t find blind-spot assist, cross-traffic alert or a power tailgate even on this premium model, though I was pleased to see VW finally added a rearview camera. VW has stated they’ll be upgrading the technology on many models starting next year.

I’m not sure how Wes got 40-plus mpg shifting above 3,000 rpm — there’s no magic at that end of the tach on this or any other diesel; in fact, one of my favorite things about this powertrain is that you never need to head north of 2,000 revs to drive in just about any kind of situation short of high-speed expressway cruising. Follow VW’s shift suggestions and you’ll be changing gears at about 1,750 rpm with perfectly adequate acceleration, and there’s no sense of lugging the engine. I ended up with an excellent 36.6 mpg average in purely city driving.

I enjoyed revisiting the VW SportWagen TDI, even if I don’t miss the one I owned; the latest model is a well-made, engaging compact wagon and a great way to introduce folks to the diesel experience. 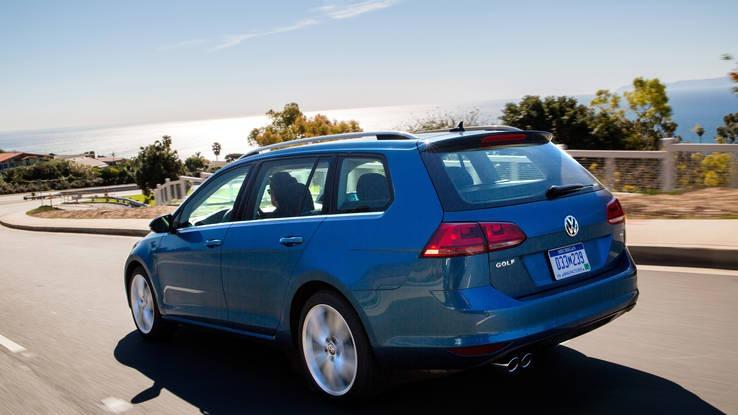 ROAD TEST EDITOR JAKE LINGEMAN: This wagon isn’t perfect, by any means, but it does reinforce the fact that almost no one needs a true SUV.

First off, there’s a ton of space in this car. Surely, four adults could fit for a road trip. I picked up a king-size blow-up mattress and a big floor jack without any problems. And like the guys above said, the interior is very nice, and visibility is great. The one thing that angered me is the iPod interface. Just put a USB slot in there please. I found an iPhone 4 adapter in the glove box, which is of no use. We’re on 6, guys; everyone else has a USB port, get it together. Oh, and my knee rests on the hard plastic of center console and got a little sore after 50 or so miles.

As expected, power from the diesel is punchy and more than adequate, though I did rev it far beyond 1,750 rpm. In fact, that’s when things start to get interesting, after the turbo spools up. You’ll never really want for power in this thing, unless you’re short shifting or rolling out from a stop in second gear. It’ll easily pass on the expressway though, without shifting out of sixth gear. I did stall it twice, both while rolling, which is strange. I quickly stabbed the start button and kept on my way.

Clutch effort is easy, as is pedal effort. I was stuck in traffic for 20 minutes or so and never felt fatigued. There’s a good amount of space for your left foot to rest, and the brakes seemed grippy right from the top of the stroke.

VW steering is better than most, and this wagon is no different. It’s actually more fun to drive than a lot of sedans, most of them Japanese. The wheel is a little too thin for my liking, but steering is direct enough to make it semi-enjoyable. The suspension was another story. There’s something going on, I thought it was in the front. After the initial impact from a pothole, there’s like a reverberation through the cabin that lasts for longer than expected. It’s not super harsh, but I could feel it in my kidneys.

The SportWagen looks about as cool as a grocery getter can. If you were looking at the front from a low vantage point, you’d be excused for thinking it’s a Golf. By the way, this car is a total auto-journalist unicorn. Wagon, check. Manual, check. Diesel, check. If it was brown, it would probably be stolen. 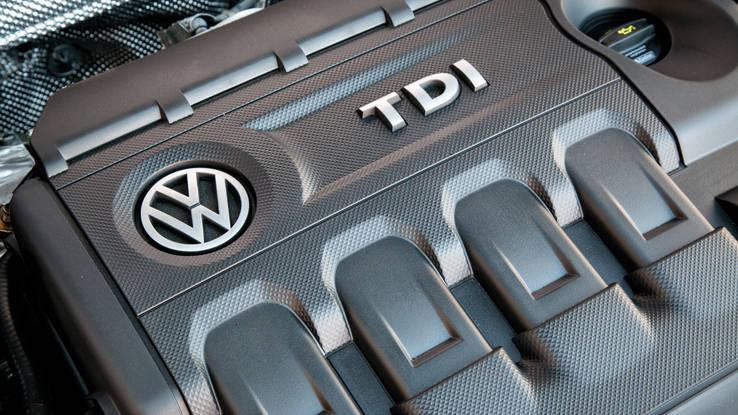 ASSOCIATE EDITOR GRAHAM KOZAK: Wow! A manual diesel wagon! If the folks at VW were fishing for adoration, this is primo bait. It might be sort of a car-writer cliché, but the SportWagen ticks just about every box imaginable (save for the RWD one), which is enough to make it the most all-around sensible vehicle I’ve been in this summer.

At $ 32,855, it’s not insultingly expensive, either. As Andy notes, it is missing some increasingly prevalent safety features, and Jake is spot-on about the outdated, proprietary VW phone/media connection setup, but beyond that I can’t think of anything the Golf SportWagen lacked that I would have wanted.

So what’s it actually like to drive and live with for a short while after all the hype?

I scored the SportWagen for a weekend camping trip, and despite my inartful loading (I more or less just folded down the seats and chucked everything in the back), it had no problem carrying loads of gear, four or five bundles of firewood, etc. I was surprised to discover that, despite a 10-inch length advantage over the Golf hatchback, the wagon rides on the same wheelbase. Not a shocker — you could do far worse than to leave the MK7’s Golf underpinnings more or less unchanged — but it’s a good indication of how much space you seem to gain by going with the longroof.

Though I’ve heard it suggested that the turbodiesel/manual/wagon combination is good for theoretically infinite fuel economy, I only managed a paltry 41.41 mpg. That was with a good mix of city, expressway and gravel-road driving, all the while loaded to the gills.

Like Wes said, dieseliness was kept to a minimum. The only times you’d know you were driving an oil-burner is when starting it up and getting it going — the engine feels somewhat course at very low rpm, although some of that may have been a symptom of a clutch that was, at first, tricky to master. And, of course, you’ll notice at the pump.

As much as I enjoyed my taste of the wagon lifestyle, I won’t pretend that this is the end-all be-all of family-haulers. The reality is that it’s still a two-row that’s not all that much bigger than the Golf upon which it’s based. If you need a third row, you’ll have no choice but to upsize to a minivan or an SUV. But if you’re realistic about your needs, and if you don’t find yourself toting around the entire soccer team on a regular basis (or ever – it’s simply not possible in this thing), then it’s worth careful consideration. 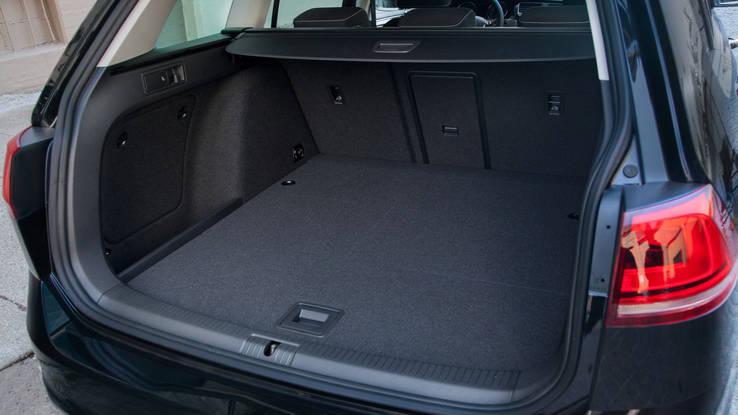 The SportWagen has a cavernous trunk that’s in line with those of compact SUVs. Photo by Volkswagen