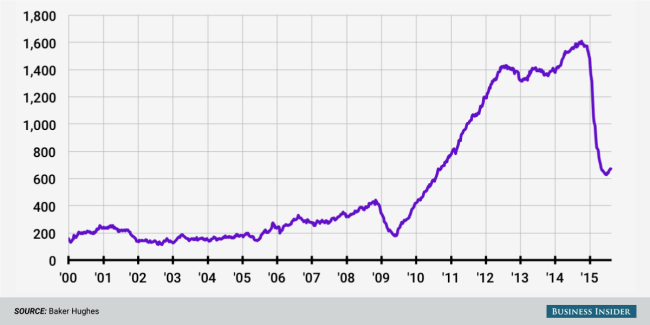 The oil industry is acting like the worst is over

The oil industry is acting like the worst is over.

This week, oil prices fell to their lowest level in 6 years.

But data from oil driller Baker Hughes and the Federal Reserve this week indicated that oil companies are starting to reverse their behavior of shutting down wells and halting production, a sign that some companies may think the worst is over for the oil market.

On Friday, data from Baker Hughes showed that for the fourth straight week, the number of rigs in use rose, with the total number of rigs online now back to April levels.

Meanwhile, the Fed’s latest report on industrial and manufacturing output showed that production at oil and gas wells rose 1.3% in July, the first monthly increase since September 2014 when the price of West Texas Intermediate crude oil was closer to $ 95 a barrel.

Jesse Hurwitz, an economist at Barclays, didn’t see this industrial production figure as portending any major shift in the oil and gas industry, however.

In a note to clients following the report, Hurwitz wrote, “This stabilization is broadly in line with the weekly data on Baker Hughes rotary rig counts. Overall, we continue to see a stronger dollar and lower energy prices as posing headwinds for industrial output and do not look for a strong rebound in the sector this year.” 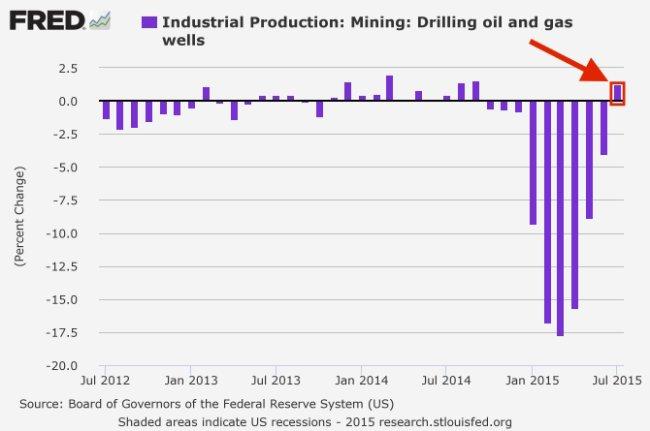 (FRED)
Oil Another potential read on why the decline in oil wells shutting down has stopped, and production has ticked back up, is that companies simply need to keep drilling to meet debt obligations.

Earlier this week we got word that production out of OPEC, the 12-state oil cartel led by Saudi Arabia, hit a 3-year high in July despite a continued glut of supply in global markets and prices continuing to decline. But with The Telegraph recently highlighting data that current oil prices currently have all OPEC members missing their budget projections, governments depending on oil revenues need to bring in whatever they can manage.

And these dynamics appear part of what’s behind the seemingly relentless supply of oil coming into the market, which the International Energy Agency doesn’t see balancing until the end of next year.

Last week, we noted that according to data from Credit Suisse, US oil production has continued to hum along despite the decline in oil rig count. Though as some readers noted, this chart doesn’t tell the whole picture as the rigs already shut down were likely not big producers anyway.

And it does look like US production and supply could soon provide the market with some relief, as the Energy Information Administration said in a report this week that daily production is set to fall to 9 million barrels a day next year from a projected 9.4 million barrels in 2015.

This, in turn, is projected to bring down crude stocks, which have been stuck near 80-year highs for the last several months. 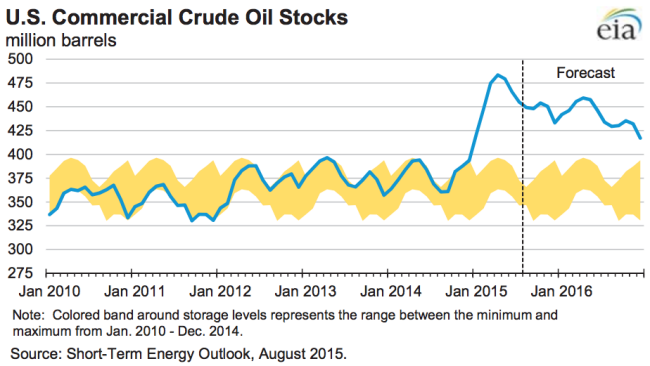 Of course, these outlooks don’t change the situation on the ground for oil, which is near a 6-year low, down 30% from recent highs, and has collapsed after markets took the relative calm in oil markets through the spring as a sign the worst was over.

But recent events have proved a challenge for market. Along with oil, the entire commodity complex has been rolling over, and all this at a time when China, the world’s second-largest economy is slowing down and devaluing its currency.

“There is a global deleveraging occurring in front of our eyes,” Russ Certo, a strategist at Brean Capital wrote in a note to clients this week.

And while this process could mean a number of things for the future direction of markets, Certo simply noted that what we’ve seen in recent months — whether its in oil markets or the Treasury market “flash crash” last fall — suggests markets are more complex, and more inter-connected, than they’ve ever been.

Gold Up, Boosted by Omicron Concerns