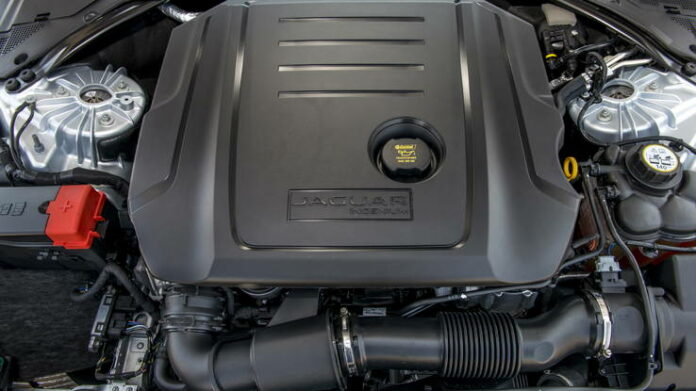 The second-generation XF is our first taste of Jaguar’s new aluminum-intensive architecture, though not the first model based on the platform: Europeans are already driving the 3-series-size XE, but all-wheel drive is considered so crucial for North America, Jag is holding its release until next year.

The XF goes on sale this autumn, launching with rear- and all-wheel drive. The same platform sits beneath the upcoming F-Pace SUV and features double-wishbone front suspension, an Integral Link multi-link rear and a 75/25 percent split of aluminum/steel.

At a glance, you’d guess the XF was longer than its all-steel predecessor, but, at 195 inches, it’s actually three-tenths of an inch shorter, the roofline one-tenth of a millimeter lower. If you’ve ever sat in the back of the first XF — short on head- and legroom compared with rivals — that sounds like a bad idea. Yet Jaguar claims class-leading legroom, there’s plenty of headroom and the entire rear-seat experience is airier, less claustrophobic. That’s partly down to the six-light glasshouse, but it’s also the packaging opportunities afforded by a 2-inch-longer wheelbase compared with the old model. The only thing that doesn’t grow is the trunk; it still holds the same 19 cubic feet.

At launch, you’ll choose from the F-Type’s 3.0-liter supercharged V6 with 335 or 375 hp. Less familiar are the new-generation 2.0-liter four-cylinder Ingenium engines, both gas and diesel.

We drive the V6 next month, but for now we’ve got an early test in a 178-hp four-cylinder turbodiesel with rear-wheel drive. Jaguar couldn’t provide an exact on-sale date but did say the 2.0D would follow shortly after launch in autumn. Pricing and mpg ratings are still TBD. 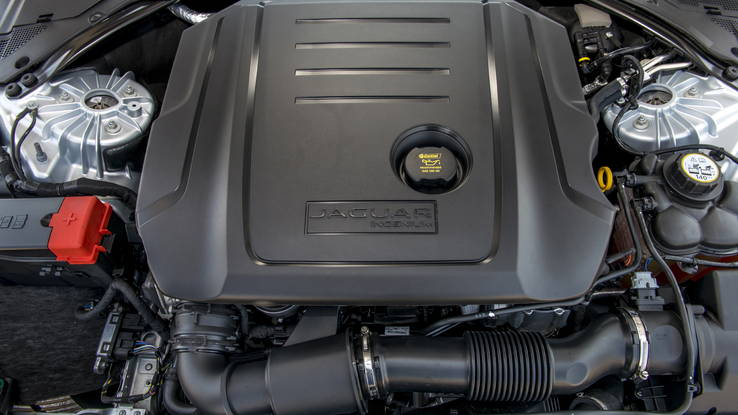 We drove the diesel on Spanish autoroutes and challenging back roads, and through city centers. You sit low in supportive, if unnecessarily firm, seats, and the stylish interior mixes XJ and familiar XF cues with some XE touches. It looks good and more cohesive than XE, but some materials feel cheap when you tap them.

There are three suspension tunes: regular passive suspension, continuously variable dampers or R-Sport passive sports suspension. Our tester had R-Sport suspension with sizable 20-inch alloys. It’s a good compromise, one still offering some suspension travel to anesthetize bumps but containing body movements well when you push harder out of town. There’s occasional fidget on fractured surfaces, but nothing detracts from the XF’s high refinement levels; this is a hushed, supple cruiser.

Part of the secret lies with the passive dampers’ extra valve — it only works at low speed and allows more oil to travel through two valves than it could through one. It softens the suspension during the urban crawl.

On great roads, the XF is enjoyable. The electro-mechanical helm is quick and precise and feels slack-free the second you move it off-center. It doesn’t quite offer the old model’s fingertip delicacy; that car has hydraulic assist. The new steering serves a bit more weight and a little less feel, but still gives the driver confidence and a strong sense of connection to the asphalt.

Jink the steering through flowing curves and the chassis follows eagerly, with masses of front-end bite and composure; enter bends at high speeds and you realize the front tires could’ve taken more. It’s fun, more so than the German opposition, but the XF can’t match the smaller XE’s agility. There’s more understeer at the limit, and the XF’s longer wheelbase detracts a little from its smaller-sibling’s hunger to change direction.

This is expected of a larger car, however, and the XF remains a satisfying experience over a favorite road — one that should intensify with the 3.0-liter V6.

Meanwhile, the Ingenium 2.0-liter diesel is eager, with plenty of low-speed flexibility — all 318 lb-ft hits from a subterranean 1,750 rpm — but it moos when you extend it, often feels short of breath and never lets you really exploit the excellent chassis. The eight-speed auto — punchy changes via the paddles, glassy smooth in auto — helps keep it spinning, but the mpg savings detract from the driving experience in a way not as apparent in the lighter XE. 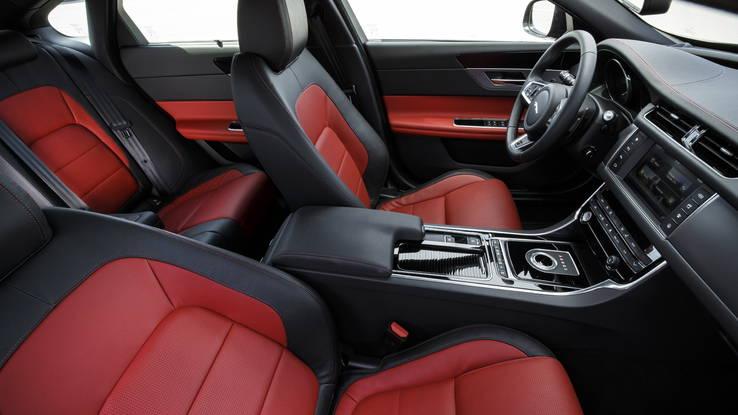 It depends. The XE is the best hot-shoe Jag sedan, so if the XF’s larger trunk and rear seats aren’t essential for your needs, we’d recommend holding fire until the XE goes on sale next year. But if you need the XF’s space, there’s a lot to like here. The XF is refined, comfortable and enjoyable — best experienced, no doubt, with at least 335 hp and a supercharged V6 under the hood. More on that in September.