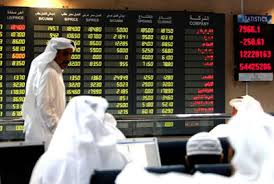 DUBAI: Stock markets in Saudi Arabia and Egypt extended losses in early trade on Monday, with the Riyadh bourse trading below technical support following a fresh drop of oil prices, and Cairo testing its own chart support amid currency depreciation worries.

Another drag on the benchmark was telecommunications firm Etihad Etisalat (Mobily), which fell 4.3 percent to a fresh 6-1/2-year low of 26.70 riyals.

Early this month the firm posted a second-quarter loss after announcing yet another negative earnings restatement; in total it has slashed its profits by 3.63 billion riyals ($ 967.8 million) for the 27 months to March 31, 2015, citing accounting errors related to the booking of revenue from wholesale broadband leases and mobile promotional campaigns.

Most other Saudi stocks also fell as the index traded below technical support around 8,500 points, where it had bottomed in March and April.

A close below that level would trigger a double top formed by the March and April peaks and pointing down to December’s low of 7,226 points in coming months.

Egypt’s bourse fell 1.1 percent to 7,540 points in another broad sell-off.

It held just above technical support at its July low of 7,527 points. Orascom Construction Industries tumbled its daily 10 percent limit, even though the firm said on Sunday it had made a net profit in 2014 of 4.6 billion Egyptian pounds ($ 588 million), compared with a loss in 2013 of 1.4 billion pounds.

The Egyptian pound, like other emerging market currencies, may come under pressure following the devaluation of the Chinese yuan.

While the tightly controlled official exchange rate remained steady on Sunday, traders at exchange bureaus said the pound was changing hands at 7.91/92 per dollar, weaker than the 7.865 quoted on Thursday.