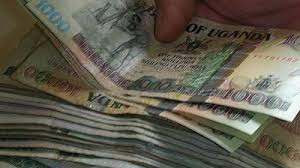 KAMPALA: The Ugandan shilling weakened on Monday amidst weak inflows and expectations the central bank would resume their hard currency purchases for reserve build up this week.

At 0906 GMT commercial banks quoted the shilling at 3,540/3,550, weaker than Friday’s close of 3,535/3,545. “We expect them (central bank) to resume their buying this week, that’s partly weakening the shilling,” said Faisal Bukenya, head of market making at Barclays Bank.

BoU, which normally buys about $ 5 million for reserve build up daily, did say why it briefly halted its purchases but similar suspensions in the past were meant to offer support to the shilling when it came under strong pressure.

Although BoU has tightened its policy stance to help support the local currency, most traders say it will remain with a depreciation bias in the short to medium term.

The shilling is 21.8 percent weaker against the greenback so far this year.

A wide current account deficit and the political uncertainty ahead of next year’s elections is seen posing much of the depreciation risk for the local currency. Uganda is due to hold its presidential and parliamentary elections next year.