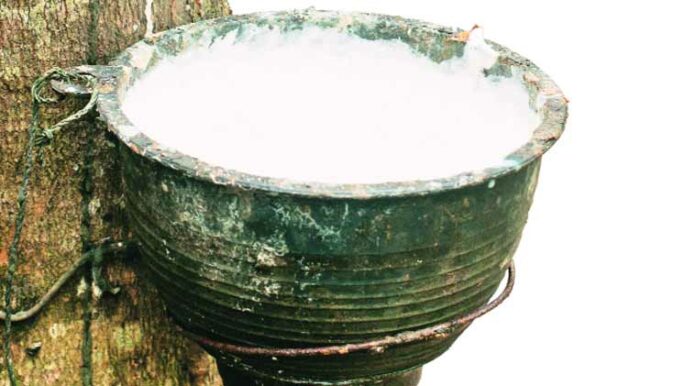 Kerala rubber growers have suffered an annual income loss of over Rs 7,100 crore from crash in prices and lower production. 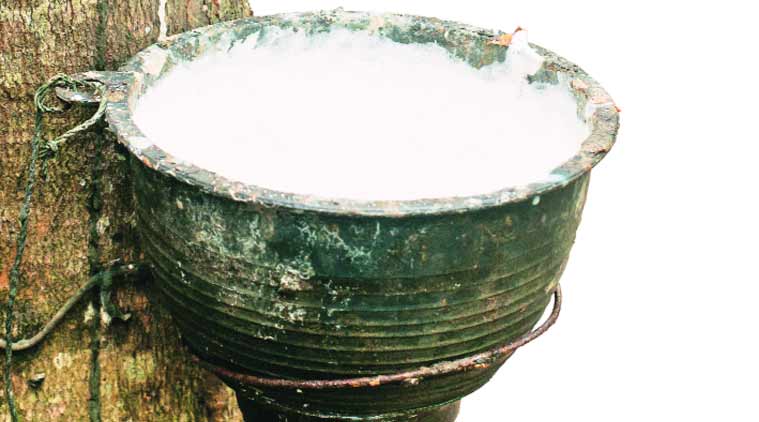 Growers of the crop in Kerala have seen the best and, now, worst of times.

P Krishnakumar doesn’t want to be known any longer as a rubber farmer .

Two years ago, this owner of a four-acre plantation in Meenachil village of Kottayam district in Kerala cut down 200 young rubber trees to grow fodder grass for his cows. Krishnakumar is more of a dairy farmer now, selling 350-odd litres of milk daily: “Some say rubber prices would pick after a few years, but my family cannot starve till then. Now, I at least earn a net income of Rs 4,000 a day and am even thinking of cutting more trees to make way for feed grass”.

At Pala — the heart of Kerala’s rubber country — Sony Sebastian is still to make this transition. Instead, he has simply stopped tapping in his four-acre plantation, as the current realisations from rubber leave little after paying for labour and other costs. He has also been forced to withdraw his children from a private ‘CBSE’ educational institution and put them in an ordinary government school.

“Many families here were sending their wards even to topnotch residential schools outside Kerala. But after the collapse of rubber prices, most can’t afford even a nearby CBSE school. We are surviving on past years’ savings and loans taken against gold. The real crisis will be when even these options are exhausted”, notes Sebastian.

Life in Pala, Kanjirapally and other parts of central Kerala is, indeed, today a pale shadow of what it was in the heady days of 2011 when natural rubber prices ruled above Rs 200 per kg and even scaled Rs 240 levels. Buoyed by these prices, and the belief that they were here to stay or go up further, scores of farmers even beyond the traditional high-range rubber-growing areas in Kottayam, Idukki and Pathanamthitta districts uprooted their coconut and cashew trees to replant these with rubber. As rubber plantations became valuable property, real estate agents and NRIs in West Asia, too, came knocking at the doors of growers in search of what they saw as safe investment havens.

But all this has changed, with prices plunging. For the last one year, these have been hovering at Rs 110-125 a kg, upsetting the calculations of everybody — above all, the growers. 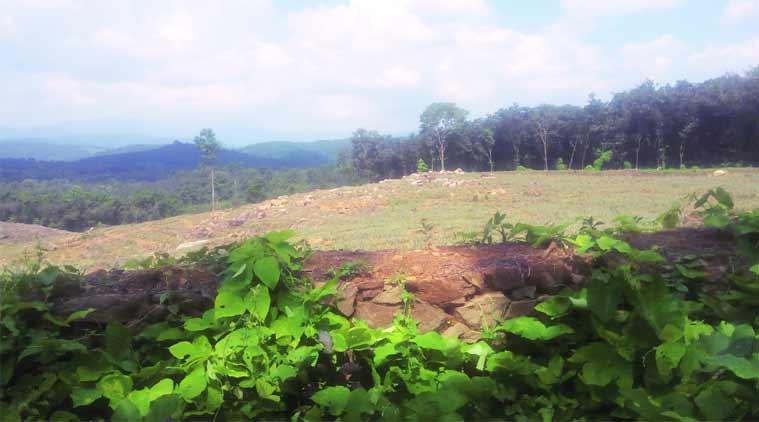 No replanting on this abandoned plantation. (Express Photo by: Shaju Philip)

Farmers usually ‘tap’, i.e. collect the latex from their trees, on alternate days. Taking peak yields of 7 kg per acre, the cost of tapping labour alone, at Rs 2 per tree and 150 trees per acre, eats into almost 40 per cent of revenues at present prices. Adding other costs — on fertilisers, formic acid (for coagulation of the latex into sheets), fixing of rain guards on trees, de-weeding, etc — would leave the farmer with barely Rs 80 from tapping an acre every alternative day.

Vast tracts of rubber plantations today sport an abandoned look, with weed overgrowth and no tapping activity. As fortunes have reversed, there aren’t many takers for rubber, be it farmers, traders or real estate investors. Rubber nurseries supplying planting materials to growers, too, have scaled down operations. According to KN Krishna Pillai, president of the Rubber Producers Society at Kanjirapally, farmers have ceased to replant aged trees. “Many have started growing grass to enter into dairying, while some others have moved to poultry,” he points out.

In Meenachil panchayat alone, around 50 rubber farmers have established medium-scale dairy farms, keeping in view the growing demand-supply deficit for milk in Kerala. Even those with small holdings have taken to rearing one to three cows. Jojo Mathew of Vilakkumadam village currently sells 85 litres every day. “I have ordered purchase of 10 more cows. I have no plans to replant rubber in my 2.5 acres, even where the old trees need to be replaced. It’s is better to diversify; depending on rubber alone will be disastrous,’’ he says.

“During the boom, living standards rose for everyone. Even middle class families bought more than one four-wheeler, while many sent their children to private professional educational institutions. Maintaining that lifestyle, enabled by rubber, is proving difficult now. Farmer households without any salaried members or sources of NRI remittances are the ones really struggling,” observes Joshy Mathew, a NRI from Pala.

Krishna Pillai reckons that only a quarter of the 180 members of the society headed by him have the capacity to sail through the ongoing rubber price crisis. “For others, it’s really hard times. If this situation persists, we cannot rule out farmers even taking the extreme step,” he warns.

In the meantime, the state government has announced a support price scheme for rubber, to ensure farmers get at least Rs 150 for every kg sold. Under the scheme, a farmer can sell sheet rubber to any registered trader at the prevailing market price, while the government would deposit the difference (over Rs 150/kg) directly to his account. But it is believed that only two lakh out of the 11.50 lakh growers have registered for the scheme, launched two months back.

According to farmers, tapping is unviable even at Rs 150/kg because of high wages and falling rubber yields. Also, in many rubber-growing areas, tappers have moved to other jobs, especially in the construction sector. Only in a few places like Kanjirappally, where there are few alternatives to rubber, tapping has resumed partially after wages have been reduced to Rs 1.50 per tree.