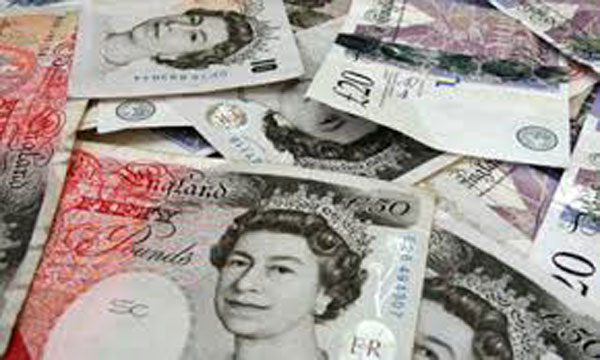 LONDON: Sterling rose on Wednesday after Britain’s current account deficit narrowed sharply in the three months to June with expectations of inflows from the European Union towards farm subsidy payments to UK farmers also helping the currency.

Numbers released on Wednesday showed the deficit fell to 16.8 billion pounds in the second quarter, far below economists’ forecasts of 22.3 billion pounds, while living standards rose at their fastest rate in more than five years.

The Office for National Statistics made few changes to previous figures for headline economic growth, but new numbers on Britain’s balance of trade and growth in household incomes eased some concerns about the shape of the recovery. Sterling rose to $ 1.5180 after the current account data, up from around $ 1.5155 before its release, and leaving it up 0.2 percent on the day.

It was last trading at $ 1.5160, slightly higher on the day. Against the euro, it rose 0.75 percent to 73.76 pence, with traders expecting widespread volatility as the market digests the annual farm subsidy payments from the European Union to UK farmers.

“The narrowing of the deficit has been noted and you saw the pound react positively to the data, but the data largely tells us what we know in that the UK economy has been robust,” said Western Union FX analyst Nawaz Ali.

“What we don’t know is how the UK economy will respond to the financial market risks stemming from China.”

The Bank of England is expected to follow the US Federal Reserve when it decides to raise interest rates from their current historic lows – a move some traders expect as early as October.

But with UK inflation stuck at zero and with worries about a Chinese slowdown and the impact of that on the global economy, the BoE is in no hurry.

Sterling has lost almost 3 percent on a trade-weighted basis , as expectations for the first BoE rate hike since 2007 were pushed into the second half of next year, from the start of 2016 previously.

“The case for UK monetary policy to tighten regardless of the (Fed’s) dithering is as clear as a bell.

British government bond prices showed little reaction to the economic growth data and mostly tracked US Treasuries. At 1430 GMT, the 10-year gilt yield was up around 1.5 basis points at 1.77 percent.