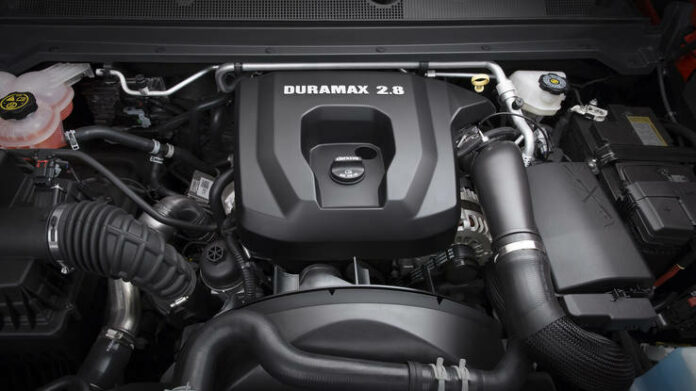 A midsize so torquey, you don’t really need a Silverado

Diesel just can’t catch a break. It took decades for Americans to forget about those ’70s and ’80s soot-spewing clatter machines and start believing diesel could be quiet, smooth and most importantly, clean. But just as diesel was enjoying a renaissance — Dieselgate blankets the technology’s image in a dark, noxious cloud of deceit.

It’s an ugly scandal, but there are signs diesel’s reputation hasn’t been permanently scarred. According to a survey conducted by automotive consulting firm AutoPacific, while 80 percent of responders thought the VW scandal was a “big deal,” only 8 percent believed it would lead to diesel’s death in the

Chevrolet hopes the misconduct won’t affect the sales of its new Colorado diesel when the pickup goes on sale this fall.

A diesel engine was in Chevy’s Colorado product plan since the beginning. So the Colorado’s systems were built to handle diesel’s demands. The cast iron 2.8-liter four-cylinder turbo diesel is certainly a beefcake with a forged steel crankshaft and forged connecting rods. It weighs 200 pounds more than the 3.6-liter V6 and a whopping 400 pounds more than the gasoline four-cylinder engine and the extra heft requires unique suspension tuning. This engine has been in service in Asian and South American markets since 2011. But to meet market demands, it needed some work.

“The weather extremes in North America are very different than what we see overseas,” says assistant chief engineer Scott Yackley. So Chevy had to muscle up the already-burly diesel to handle our brutal winter cold as well as the desert southwest’s scorching heat. The engineering team logged more than 35,000 test hours on the dyno and tow tested in high-altitude places like ’s Rocky Mountains, as well as through in 125-degree heat. 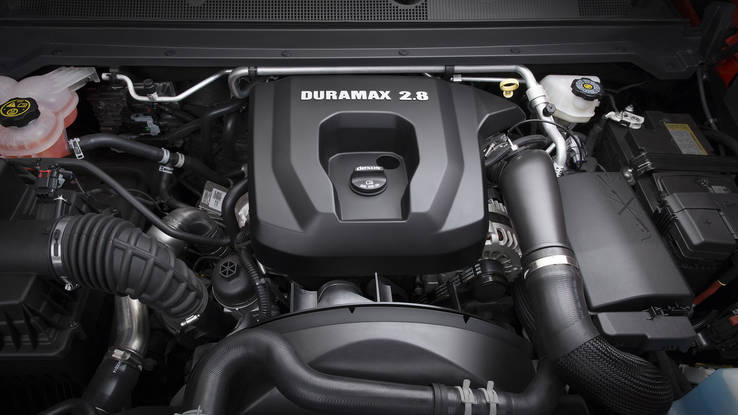 To help the engine fire more quickly at low temperatures, Chevrolet added ceramic glow plugs, a high-output starter motor and a unique battery and cable system. Yackley mentions that the electronic control unit also goes though a unique calibration when it encounters severe cold. To help deal with the other end of the temperature spectrum, the team added a new electro-viscous fan with two additional blades for better cooling.

The big four-cylinder needed some refinement to meet their targets, so the team added a balance shaft to the engine with an integrated oil pump. Directly underneath the balance shaft on the oil pan, they bolted damped steel—plates sandwiched with thin acoustical foam membranes to help absorb noise. The timing belt cover on the front of the engine also uses this same damped steel. To help deaden injector and valvetrain noise, the engineers developed an acoustical blanket on top of the engine with three different foam densities.

Our emissions standards are stringent. So this little Duramax uses a similar urea-selective catalytic reduction exhaust after treatment as GM’s heavy-duty pickups as well as the Cruze diesel. Chevy says this is the cleanest truck diesel they’ve ever produced. The company predicts a refill of the diesel exhaust fluid canister (mounted out of sight beneath the bed) should last 7,500 miles under normal use — conveniently the same as the oil-change interval.

The emission system’s higher backpressure does bleed some power from the engine, so while the global Duramax makes 197 hp, ours produces 181 at 3,400 rpm. However, GM was able to maintain the same 369 lb-ft torque peak at just 2,000 rpm thanks to a smaller compressor wheel inside the turbine for quicker spooling. Like the 6.6-liter Duramax in GM’s heavy-duty trucks, this one has an integrated exhaust brake. Here, it’s paired to the truck’s tow/haul mode to help slow a heavy load.

The 2.8-liter Duramax is matched to the same 6L50 six-speed automatic found in gasoline , but a new damper in the torque convertor (called the centrifugal pendulum vibration absorber) is used to reduce noise and shaking. Yes, the overseas market diesel does get a manual transmission, option but Chevy says so few buyers here would check the box, it didn’t make sense to add more dealer and manufacturing complexity. Boo. All diesel use a 3.42:1 axle ratio, helping 2WD models tow 7,700 pounds — 700 more than a gas , while 4WD models move 7,600 pounds. Every Colorado diesel has an integrated trailer brake controller mounted conveniently high on the dash next to the gauges. 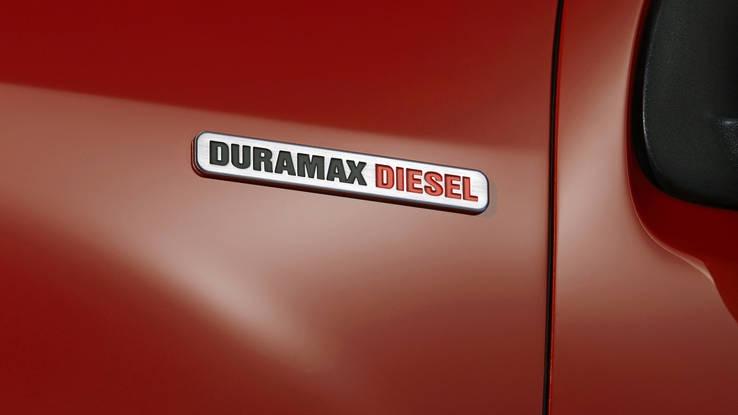 A Duramax Colorado is hard to spot: The only visual clues are the small fender badges and a massive single exhaust pipe, but as soon as one rolls up in the lane next to you, the mellow chuffing of the diesel engine is a giveaway. From the outside, it’s really no louder than a passenger-car diesel. Climb inside and nearly all the noise goes away. At low rpm, it’s difficult to discern this is a diesel. It’s quiet, smooth and snappy off the line. Yackley says 90 percent of the engine’s torque is available from 1,400 rpm to 2,800 rpm. Lay into the throttle, and thanks to the massive torque wave, it moves. Yes, a V6 Colorado with its 300 hp can probably hit a lower ¼-mile time, but the extra 100 lb-ft or torque served deep in the rpm range makes the Colorado diesel feel more like a tool designed for hard work.

Speaking of work, on backcountry roads near , we were able to test the truck towing a 3,865-pound horse trailer. The Duramax had no trouble moving that load. In fact, we were able to chirp the tires from a hard launch. Engage tow/haul mode, and the transmission expertly downshifts on grades to help slow the trailer. The exhaust brake’s operation was harder to notice. Chevy says it takes a relatively steep hill to really feel it work, and our driving loop wasn’t packed with elevation changes. A quick drive in a 3500 HD proved its operation far less aggressive than the exhaust brake on the big Duramax.

Chevy still doesn’t have the Duramax’s EPA fuel economy certification but this should be the most fuel-efficient pickup truck sold in the US. On a short 40-mile fuel economy run in a 2WD , we saw 36 mpg from gentle throttle application, a great number for a 4,500-pound pickup. Don’t expect EPA highway ratings quite that high, though. If the Colorado could sip fuel at that rate for a whole 21-gallon tank, it would deliver more than a 750-mile range. 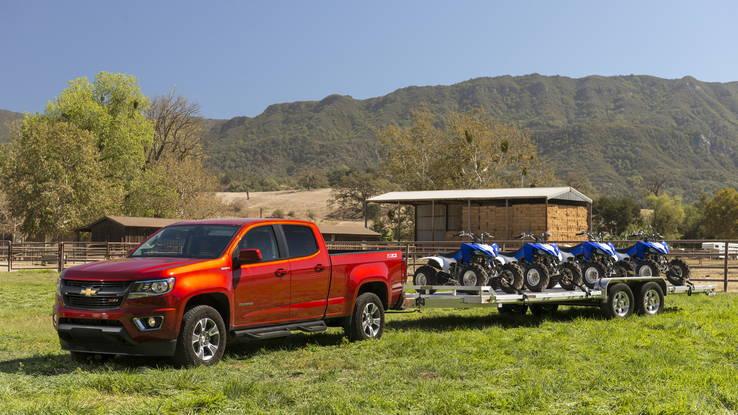 Yes. The new diesel is a torque monster; it makes the Colorado feel more, well, trucky. We dig that. However, to get a V6 under the new ’s hood rather than the base four-cylinder requires only $ 1,235. Not a bad deal for 300 hp. The new Duramax? It costs slightly more than three times as much — $ 3,730. It’s an expensive option, one pricing this truck near the Silverado. For those needing a fuel- and space-efficient truck that can handle a fairly serious trailer, the Colorado diesel seems like the perfect fit.