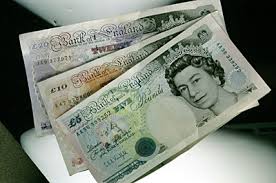 LONDON: Sterling sank against both the dollar and the euro on Monday after a monthly survey of the services sector crushed any remaining market expectations that the Bank of England is likely to raise interest rates any time soon.

The 53.3 point reading on the index of purchasing managers in a sector that dominates British economic output was the lowest since May 2013, and sharply below analysts’ forecasts and the previous month’s figures.

The pound dropped almost half a cent against the dollar in response before steadying at $ 1.5190, down from $ 1.5220 before the numbers were published.

“This has taken the pound properly lower,” said Tobias Davis, a currency hedging manager at Western Union in London. “It is further evidence that all the rate hike talk is still premature. Couple this morning’s data with a deteriorating external environment, we’re not going to see a sniff till next year.”

After US jobs numbers on Friday that shocked markets out of any expectations of a rise in Federal Reserve interest rates this year, the PMI numbers add to a general sense that the world economy is slipping backwards.

If that’s true, and the outlook for rates is flat for the foreseeable future, then the pound and the dollar should be first to suffer. Both currencies have gained over the past year from expectations both official and market rates would rise while those in Japan and Europe are held at rock bottom.

Overnight interbank swaps rates – effectively market pricing for rates over the next year – dipped in response although they remained above Friday’s lows. British government bond futures pared losses by around 10 ticks after the data, but overall traded 39 ticks lower on the day at 119.34 by 0920 GMT.