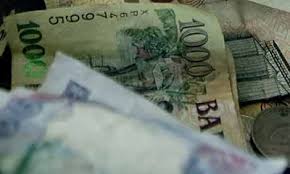 KAMPALA: The Ugandan shilling was stronger on Monday as a slump in demand forced commercial banks to trim their hard currency positions, although the unit’s strengthening was seen as only temporary.

A market note from the Bank of Africa said the shilling’s strengthening was “attributed to the mild (dollar) demand levels in the market as most of the corporates perceive the level as high.”

The Uganda shilling’s appreciation was likely to be short lived “as local and off-shore demand for the dollar is expected to pick up as we approach the festive period,” the note said.

So far this year, the shilling is 24.8 percent weaker against the dollar.

A combination of strong corporate demand and investor jitters over a deteriorating trade deficit and political uncertainty ahead of next year’s elections has kept the shilling on a weak footing.

The Bank of Uganda has tightened its policy stance, raising its benchmark Central Bank Rate (CBR) by 500 basis points to 16 percent this year to try stem the pressure on the shilling.

Traders have said the central bank is likely to hike its rate again around the middle of this month when its monetary policy committee meets after a sharp rise in consumer prices.