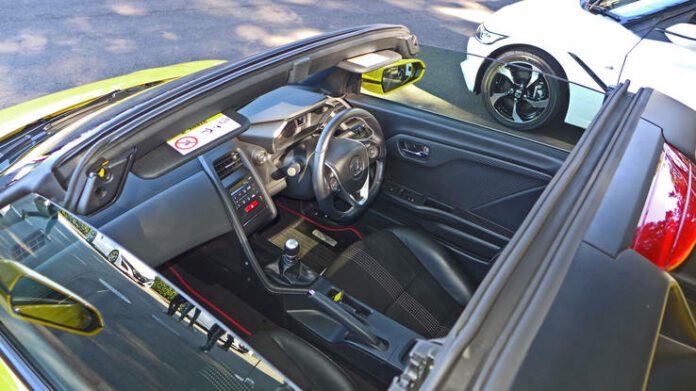 Old Sports eXperience: The tiny S660 is the purist’s Honda

Parked in the lobby at Honda’s Tochigi, Japan automobile R & D center is a gleaming silver 1962 S360 roadster. Impossibly small, its miniscule four-cylinder, 22 cubic-inch motor is linked to the rear wheels via dual chain drives. It was as much a four-wheeled motorcycle with automotive ambitions as was is a real grown-up car, which only adds to its outsized charm.

The S360 existed only as a prototype, but while it didn’t make it to production, it was a clear first step toward the joyful S-roadsters — a lineage that began with the S500 and stretched all the way to the acclaimed S2000.

Honda brought us to Tochigi ahead of the Tokyo Motor Show so we could explore some of its upcoming product — everything from the Acura NSX (much more on that here) to the strange Clarity fuel-cell sedan (more on that soon) was represented. But the one we were most excited to drive, however briefly, was the S360’s youngest descendant: The S660. 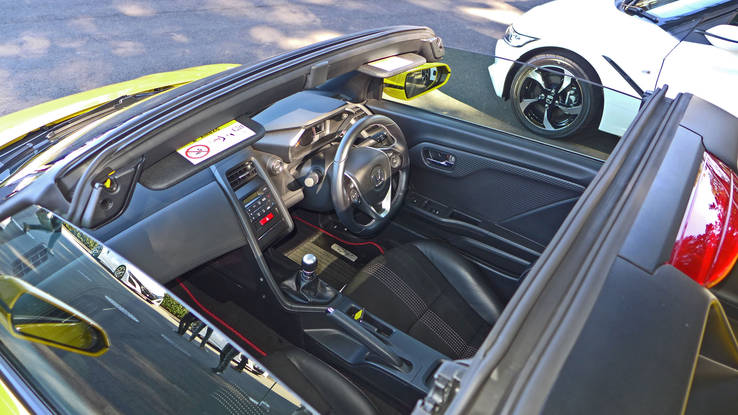 Like the rest of the S660, the cockpit is tiny — but we didn’t have any trouble tucking in behind the steering wheel (which, yes, is also tiny). Photo by Graham Kozak

Though the S660 is similar to the Honda Beat of the early 1990s in size, configuration and spirit, it’s the vision of the Ryo Mukumoto — a Honda engineer who became project leader for the roadster at just 22 years of age after winning a design competition.

It’s also a kei car, one member of a class of what must surely be the most adorable creatures of bureaucratic fiat the automotive world has ever seen. In exchange for a set of tax benefits, kei cars are strictly limited in size (no more than 11.2 feet long by 4.9 feet wide), displacement (660cc, hence the name) and power (63 hp).

On all fronts, then, the S660 makes the Miata feel like a German luxury touring convertible; we were floored at just how small our tester, a delightful yellow lemon drop of a car, really was when we walked up and peered down into the cockpit for the first time.

Yet we were able to fold our 6-foot frame behind the 13.8-inch right-hand steering wheel comfortably — Honda packaging at its best. True, the car’s top (a rollable fabric job a la the Alfa Romeo 4C Spider) was already removed, which probably didn’t hurt. But a reasonably fit, somewhat determined American adult could make this car work as a daily.

Just behind the cockpit sits the S660’s engine, a mid-mounted turbocharged I3 shared with the ridiculously cuddly Honda N-One. On our tester, it was paired with a six-speed manual. A CVT is available, but it’d be a crime to forgo the manual gearbox; its throws are, in true Honda tradition, short, precise and crisp.

It’s almost enough to make you forget that the S660 is … well, we hesitate to say slow, but it’s definitely not fast. Quick, maybe, but only barely. The lack of power isn’t necessarily a make-or-break issue (slow car fast and all that) but a little more go wouldn’t hurt if we had to share the road with American-size traffic. Even so, as we whipped it up to its top speed — around 85 mph — and the wind roared in the cockpit, we broke into a full ear-to-ear smile. And then our turn was over.

Tragically, we were confined to a track, and for just a couple of laps at that, and so we didn’t get enough time behind the wheel to explore the car’s back-road charms or shortcomings or see what its 45/55 front/rear weight distribution is like at its kei-sized limit. Our brief impressions, however, confirmed what we already suspected. Or perhaps what we were predisposed to believe: The S660 is, from its design to its packaging to that grin-inducing, intangible cheerfulness, the purest sports car that Honda currently makes. 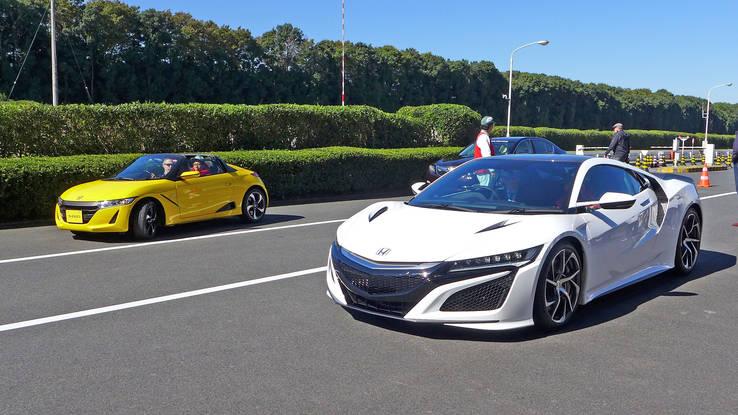 The NSX and the S660: Two very different approaches. Photo by Graham Kozak

Even so, our rational side insists that the S660 is a less-than-perfect fit for the United Sates. It’s too small, too slow, too frivolous for this market — or at least it’s likely to be perceived as such by buyers who, in their reluctance to compromise, inevitably end up with compromised cars.

We’re not even sure how the federalization process would work, because safety regulations for kei cars apparently aren’t quite up to U.S. standards. Adding more safety gear would increase weight; weight would necessitate more power. But not too much more power, hopefully. It’d be a tricky equation to nail, but if Honda could pull it off …

Honda president and CEO Takahiro Hachigo says that we’ll see a “fun to drive” ethos reflected across the company’s near-future lineup. In the United States, that means the Acura NSX and the long-awaited Honda Civic Type R; these powerful, thoroughly modern hero cars will surely help cultivate a new generation of fans.

But the S660 is fun of a different, decidedly old-school sort — acolytes of the old Honda way will appreciate it immediately, and it resonates naturally with those of us who don’t pretend to live at the track. It’s decidedly not an S2000 replacement, nor is it supposed to be.

Were Soichiro Honda alive, we suspect he’d love it. We can’t think of any higher praise for a Honda than that.