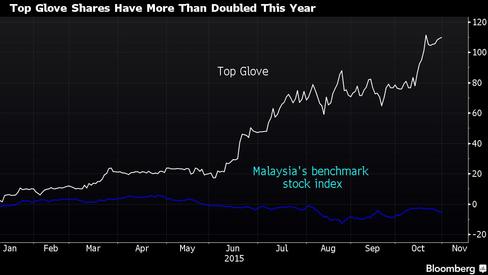 Top Glove Corp. expects to conclude at least one acquisition in the fiscal year through August as the Malaysian company seeks to maintain record earnings momentum.

The world’s biggest rubber-glove maker is targeting rivals as well as manufacturers of condoms and catheters and will raise as much as 1 billion ringgit ($232 million) in bank loans to spend on acquisitions, Chairman Lim Wee Chai said in an interview Thursday. The company is working with banks including HSBC Holdings Plc and JPMorgan Chase & Co. on potential deals, he said.

The company, which commands a quarter of the world’s glove market, is making acquisitions a priority to sustain growth after profit more than doubled in the last quarter. The ringgit’s drop to a 17-year low is helping boost the value of sales, which are mostly in dollars. Top Glove shares have jumped 110 percent this year, the best performance among the nation’s 100 biggest companies.

“In order to continue to grow, it is very important for us to do M&As,” said Lim at the company’s new 23-storey headquarters in Setia Alam, a town outside Kuala Lumpur. “Big or small, we will be interested as long as it is relevant and suitable.’’

Top Glove’s net income surged 123 percent in the last quarter, taking its earnings to a record 281 million ringgit for the year ended Aug. 31. The ringgit has depreciated 19 percent against the dollar this year, making it Asia’s worst performing currency, as slumping crude prices cut state revenue for the oil exporter.

“We are always in talks with potential sellers locally and overseas,” Lim said. “Preferably it is in the glove business. If not, it would be glove-related business or maybe other health-related products,” he said.

“Top Glove can diversify into other products that provides better margins, but
they should still remain focused on their key core business, which is glove
manufacturing,” said Chin, who tops Bloomberg Absolute Return rankings for his calls on Top Glove. “There is still a lot of room for growth within the glove industry. There’s nothing wrong in venturing into higher margin businesses, it should be fine if it remains relatively small to their core business.”

Top Glove expects the currency to stay around 4 ringgit to 4.20 ringgit to the dollar as long as crude oil prices remain at current levels, which could last for two to three more years, Lim said.

“About 30 percent of last quarter’s profit was from foreign exchange gains,” Lim said. “I’m quite confident that earnings would sustain around this level for the next two to three quarters with higher production efficiency and the weak ringgit,” Lim said.

The company’s shares have advanced 18 percent this month, compared with the FTSE Bursa Malaysia Top 100 Index’s 3.1 percent gain. The stock trades at 18.6 times its 12-month projected earnings, higher than its five-year average of 15.6, data compiled by Bloomberg show.

Lim said the stock has more potential for upside as its valuations lag behind that of its closest competitors. Glove maker Hartalega Holdings Bhd. trades at 26.8 times while Kossan Rubber Industries Bhd. has a multiple of 22.8.

Can Libya Become A Global Oil And Gas Power Once Again?

Can Libya Become A Global Oil And Gas Power Once Again?

Spain’s GDP to be hit by inflation, bottlenecks in Q4, early 2022, De Cos says