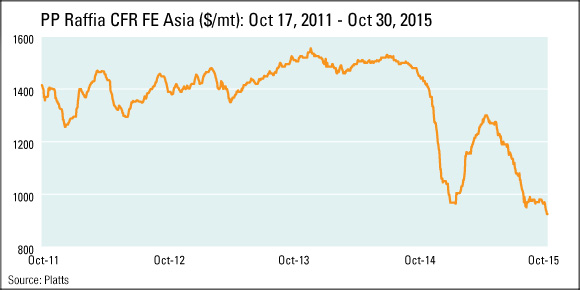 The CFR Far East Asia polypropylene raffia marker fell $40/mt week on week to $925/mt Friday, the lowest since the assessment began in October 2011, due to an oversupply in China.

“Everyone including Sinopec is facing pressure to sell,” said a China-based polymer trader. “Coal-to-olefin material is coming from North China to East China and South China, creating a supply glut.”

The trader said producers are still expected to be profitable when domestic polypropylene prices are around Yuan 6,900/mt, given low feedstock costs.

The East China domestic price for PP raffia was heard at Yuan 6,850/mt Friday, equivalent to $870/mt on an import-parity basis, well below the CFR price.

The marker was replaced in October 2011 by the daily PP raffia CFR FE Asia assessment.