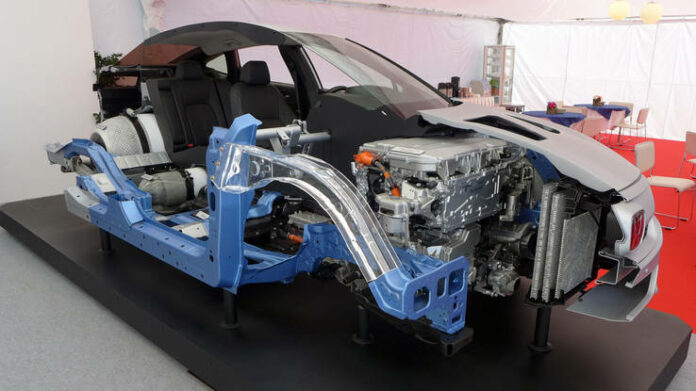 The future looks weird but drives a lot like the present

Honda has decided that the future of transportation—sorry, we mean the future of personal mobility—is at least substantially tied to what it calls the hydrogen economy; its president and CEO Takahiro Hachigo has even gone so far as to call hydrogen propulsion the “ultimate technology” that his company will pursue.

Put aside for a moment that nagging feeling that hydrogen will be, in perpetuity, about a decade away from widespread adoption: If H2 is the future, then the new 2016 Honda Clarity fuel cell vehicle represents the very bleeding edge of it.

The future is, er, rarely as sleek as you expected it to be, as both this car and the Toyota Mirai demonstrate, but we can tell you that the Clarity seems to work as advertised: We had a chance to crawl around the sedan ahead of the Tokyo motor show, and even had a (very) brief turn at the wheel, plus a similarly short stint in a test mule for its plug-in hybrid platform-mate.

But first, the specs.

Hydrogen fueling stations aren’t exactly bountiful anywhere on the planet, so we’ll get the big one out of the way first: We were told that range is “more than” 700 km on the Japanese test cycle, which translates directly to 435 miles. “Somewhere north of 300 miles” seems like a safe bet for US drivers to keep in mind. It’ll refuel in approximately three minutes (that’s two fewer than the Mirai, but it does vary based on temperature and atmospheric conditions), pumping squeaky-clean H2 into the onboard tanks at a maximum pressure of 70 MPa, or just over 10,000 psi.

That last figure has a lot to do with why the Clarity looks the way it does. Today’s composite H2 tanks wind up being cylindrical to accommodate highly pressurized fuel, which makes them somewhat difficult to tuck away under a vehicle’s body. Either you have a bunch of small tanks, which increase complexity and weight, or a big tank which is somewhat hard to position elegantly. The Clarity splits the difference with a big tank in the trunk, directly behind the rear passenger seat, and a smaller one under the rear seat. 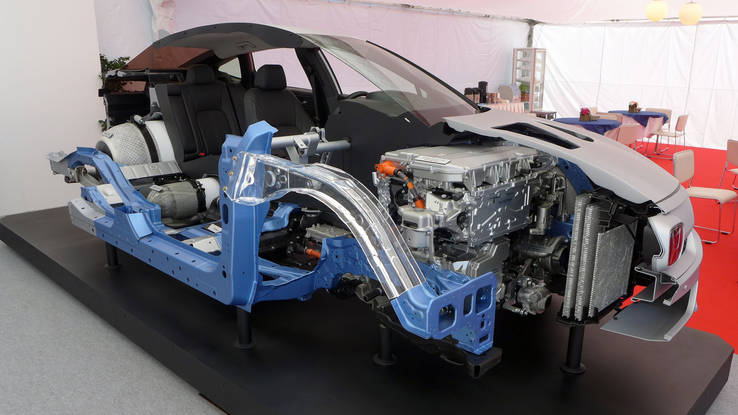 A cutaway model of the Clarity shows the forward position of the fuel cell stack as well as the dual hydrogen tanks. Photo by Graham Kozak

As a result, the Clarity is visually bulky from some angles. It’s not all that big, really: At 192.7 inches in overall length, it’s only about 1.3 inches longer than an Accord sedan (and a third of an inch taller). But it doesn’t seem to compromise on interior space despite the tanks, and there’s still enough room in the trunk to accommodate the all-important trio of golf club bags, even if the styling seems destined to be an acquired taste.

The Clarity’s powertrain is going to seem familiar to anyone accustomed to electric vehicles: Its electric motor supplies a maximum of 130 kW, or 174 hp, and 221 lb-ft of torque to the front wheels. It’s actually powered by a lithium ion battery, which in turn is charged up by a fuel cell stack — which is why the motor’s 130 kW can be higher than the fuel cell’s 100 kW peak output. Here, the stack, which does the not-so-dirty work of converting the onboard H2 into electricity, is down 33 percent in size compared to its forerunners; it’s about the same size as a conventional V6 and sits just about where a gasoline engine would go on a conventional car.

What impact that packaging has on high-speed vehicle dynamics, we can’t say; we simply didn’t have enough time to get more than the briefest of first impressions. From what we can tell, driving is positively unremarkable. There’s the sensation of silent thrust you get with an electric car (which, again, is what a fuel-cell vehicle fundamentally is), but we couldn’t shake the feeling that it packed a little less punch than the EV-retrofitted grown-up go-karts we’re used to getting.

Put your foot down on the accelerator and you’ll hear a strange, faint sucking/whooshing coming from somewhere out near the bow; that’s what a fuel cell’s hydrogen intake sounds like, we were told. It doesn’t exactly set the heart a-racing, but it’s kinda cool, or at least novel. 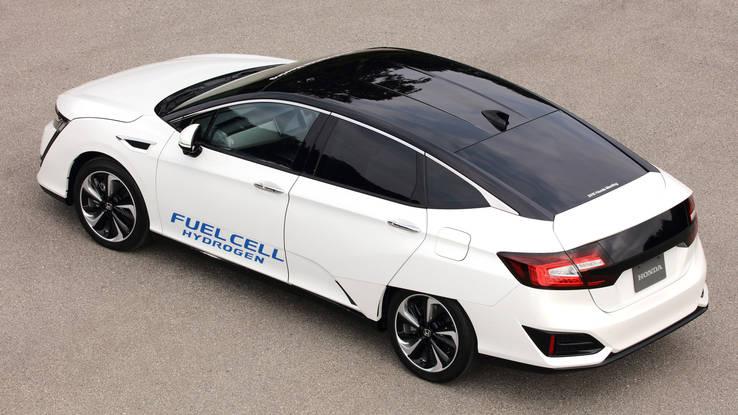 In an effort to make a fuel cell car that looks, drives and feels as conventional as possible, the Clarity comes off as…a little bit weird from some angles. Photo by Honda

As with the Clarity, our time in in the test mule for an upcoming, next-gen Sports Hybrid i-MMD (that’s for “intelligent multi-mode drive”) was too brief to really get a feel for the technology, but consider this your confirmation that the fuel cell vehicle will have a platform-mate down the road, and it will fill the role of the complicated-but-impressive Accord plug-in hybrid. Electric-only range will be around 39 miles, which isn’t enough to best the 2016 Chevy Volt but is nevertheless about three times better than its predecessor.

The Clarity will hit the Japanese market in March 2016, with early vehicles going into government and business fleets. Leases will then be extended to Japanese consumers, followed by American (read: Californian) and European drivers at some point after that. Its Japanese price is roughly $ 63,300, including consumption tax, which reflects the fact that it’s essentially a hand-built specialty car at this point.

Will that ever change, with prices dropping as hydrogen refueling infrastructure becomes ever-more widespread? Honda says it will. Just give it around…ten years.