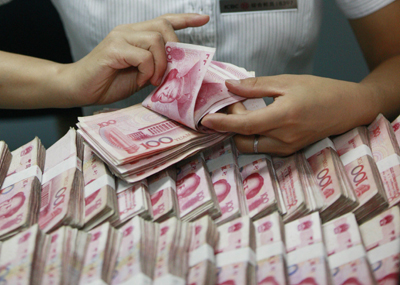 SHANGHAI: China’s yuan firmed against the dollar on Wednesday after President Xi Jinping said the country could maintain its economic growth and some state-owned banks sold dollars to support the Chinese currency, traders said.

The People’s Bank of China set the midpoint rate at 6.3343 per dollar prior to the market’s opening, 0.05 percent weaker than the previous fix 6.331.

The spot market opened at 6.3363 per dollar and yuan was changing hands at 6.3348 at midday, 0.03 percent firmer than the previous close.

Late on Tuesday, Xi said China can maintain annual economic growth of around 7 percent over the next five years but there are uncertainties.

Traders reported that some state-owned banks increased their sales of dollars in mid-morning, leading the yuan to strengthen.

“The central bank still wants to keep the yuan stable for now even though it planned to make the currency more market-oriented,” said a trader at a Chinese commercial bank in Shanghai.

Beijing has been making its currency more international and market-oriented as part of a diplomatic push for the yuan’s inclusion in the International Monetary Fund’s Special Drawing Rights (SDR) basket. The IMF is expected to decide this month.

Despite the prospect the yuan will be added to the basket, the willingness of foreigners to hold offshore yuan has flagged as China cuts interest rates and the United States prepares to raise them.

The offshore yuan was trading 0.19 percent weaker than the onshore spot at 6.3471 per dollar.

The PBOC cut interest rates in late October in a bid to jump start growth in its stuttering economy, a move that traders see as negative for the yuan’s value, while the rate hike in US might boost the dollar.