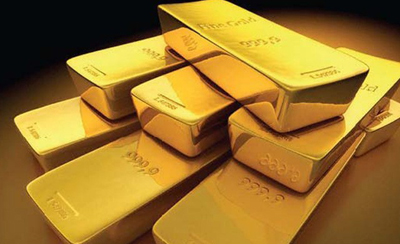 Gold steadies near 4-week low ahead of US data

LONDON: Gold steadied near one-month lows on Wednesday as the previous day’s slide tempted some price-sensitive buyers back to the market, but it remained under pressure from a rising dollar and talk of a near-term hike in U.S. interest rates.

Prices dropped more than 1.4 percent on Tuesday, their biggest one-day fall in 3-1/2 months, to touch their lowest since early October at $ 1,114.10 an ounce.

Bullion has been under pressure since the Federal Reserve last month hinted it may hike rates in December, reversing earlier expectations that the first U.S. rate increase in nearly a decade could be delayed to next year.

Gold, a non-yielding asset, tends to benefit from a low interest environment.

“Two weeks ago, a December (increase) looked relatively unlikely, and now it looks much more likely,” Natixis analyst Bernard Dahdah said. “Since then the price of gold has been relatively depressed.”

Traders will be closely scrutinising U.S. data for clues on the timing of the first rate rise, he said. “Once that takes place, people will be speculating how quickly rates will continue to rise. It will be that kind of speculation that will drive the price of gold.”

The dollar rose 0.4 percent against the euro ahead of the data, while global equities were set for their third straight day of gains.

Gold prices have also come under pressure from outflows from exchange-traded funds (ETFs), with holdings of the largest, New York-listed SPDR Gold Shares, down another 3 tonnes on Tuesday.

Interest in gold picked up overnight in some parts of Asia, MKS said in a note on Wednesday.

“Tokyo traders returned to business as usual after yesterday’s ‘culture day’ holiday and were on the bid, happy to lock in profits considering last time they saw the market, spot gold was trading at around $ 1,140,” it said.

“China (traders) were again buyers, with the premium moving higher than the previous day to sit at around $ 2.50-3.00 over spot.”

Lonmin, the world’s third largest platinum producer, could stop trading if its $ 400 million cash call through a rights issue is unsuccessful, the company said.