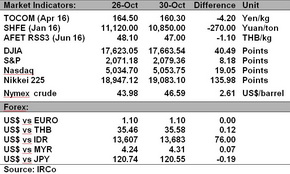 IRCo’s DCP fell by 1.8% (2.2 US cents) from 127.00 US cents/kg on Monday to 124.76 US cents/kg on Friday which was in line with the declining trend of natural rubber (NR) prices in major Asian futures and physical markets.

NR price did not improve despite the improvement of crude oil price on NYMEX during the week. NR price was mainly influenced by rubber and non-rubber factors such as the uncertainty of U.S. interest rates hike, weak global economy particular in major NR consuming countries as well as the slowdown of automotive industry in China.

IRCo, was of the view that NR price in the coming weeks would remain influenced by the non-rubber factors as well as the market perception on NR fundamental situation.

The comparison of NR Prices, equity, crude oil price and currencies between 30 and 26 October 2015 are as follows: