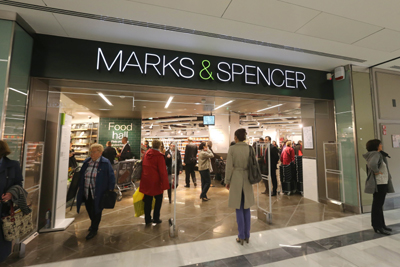 LONDON: British retailer Marks & Spencer showed that efforts to boost profitability in its troubled clothing business are starting to pay off even though sales fell again in the latest quarter.

M&S, a mainstay of British shopping streets for more than 130 years, also beat forecasts for first-half profit and increased its dividend, sending its shares up as much as 4.2 percent.

The performance will give a boost to Chief Executive Marc Bolland, who, rather than chasing unprofitable sales has focused on growing gross margins – the difference between the price M&S pays for goods and the price it sells them – mainly through improvements in sourcing.

Bolland, CEO since 2010, regards general merchandise, spanning clothing, footwear and homewares, as a modest sales growth opportunity but a significant one for margin growth.

“We have delivered more sourcing gains and earlier than planned,” he told reporters on Wednesday.

Bolland has spent billions of pounds on the redesign of products, stores, supply chain logistics and the website to address decades of under investment at M&S’s clothing business. Hopes that this will pay off has contributed to M&S shares rising by a third over the last year.

But his critics argue increasing gross margins alone is not a source of long-term growth and say the retailer is still failing to tempt younger shoppers, who can choose from a myriad of fashion brands including Zara, Next and online-only outlets.

“The top line performance is nothing sparkling, but the upside surprise is in the gross margin, where gains are significantly better than hoped,” one major institutional investor in the retailer said.

M&S’ sales of general merchandise at stores open over a year, fell 1.9 percent in the 13 weeks to Sept. 26, its fiscal second quarter.

That compares to analysts’ forecasts in a range of flat to down 2.0 percent, with a consensus of down 1.2 percent, and a first quarter fall of 0.4 percent.

Bolland said the outcome reflected unseasonal conditions and a decision to focus on full price sales.

Over the first half, M&S’ online sales increased 34.2 percent, while like-for-like sales in stores were down just over 6 percent.

“This buys the company some time to rediscover the magic potion which may tempt younger shoppers into its stores,” Richard Hunter, Head of Equities at Hargreaves Lansdown, said.