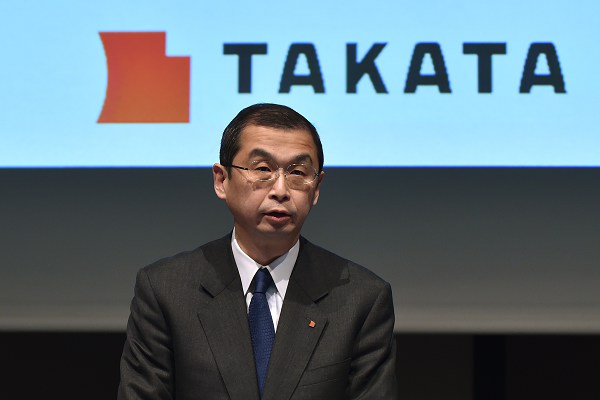 TOKYO: Takata shares plunged a fifth Wednesday after top client Honda dumped it as an airbag parts supplier and US regulators slapped it with a record fine, in the latest blow to the crisis-hit firm.

The Tokyo-listed stock fell as much as 19.8 percent to 1,100 yen ($ 9) in early afternoon trade as investors reacted to news that US authorities announced up to $ 200 million in penalties and Honda said it will stop using Takata airbag inflators linked to at least eight deaths and scores of injuries globally.

Japanese financial markets were closed Tuesday for a public holiday, so Wednesday was the first time the firm’s stock had been tested since the double whammy.

Takata’s airbag defect — thought to be associated with a chemical propellant that helps inflate the devices — can cause them to deploy with explosive force, sending metal shrapnel hurtling toward drivers and passengers.

“On a global basis, no new Honda and Acura models currently under development will be equipped with a front driver or passenger Takata airbag inflator,” the automaker said.

In response, Takata’s senior vice president for global quality assurance said it was studying the decision by Honda, which accounts for about 10 percent of the airbag giant’s global sales.

“We want to understand their intention,” Hiroshi Shimizu said Wednesday.

On Tuesday, the US National Highway Traffic Safety Administration said the Japanese auto parts maker had evaded reporting requirements, including making “the conscious decision” not to report two incidents to the regulator, despite a mounting death toll linked to its airbags.

The agency said the company showed a pattern of such behaviour dating back to 2009, with both the US government and with automakers who installed the airbags in their cars.

“For years, Takata has built and sold defective inflators. It refused to acknowledge that they were defective,” said Transportation Secretary Anthony Foxx.

“Delay, misdirection, and refusal to acknowledge the truth allowed a serious problem to become a massive crisis.”

Takata said they “will comply with all aspects of the settlement and are committed to being part of the solution.”

“This settlement is an important step forward for Takata that will enable us to focus on rebuilding the trust of automakers, regulators and the driving public,” Shigehisa Takada, the company’s chairman and chief executive officer, said in a statement.

The world’s top automaker Toyota said it was monitoring the latest chapter of the Takata crisis.

“We are continuing to investigate Takata-manufactured airbag inflator issues,” and will take necessary actions, Toyota said in a statement.