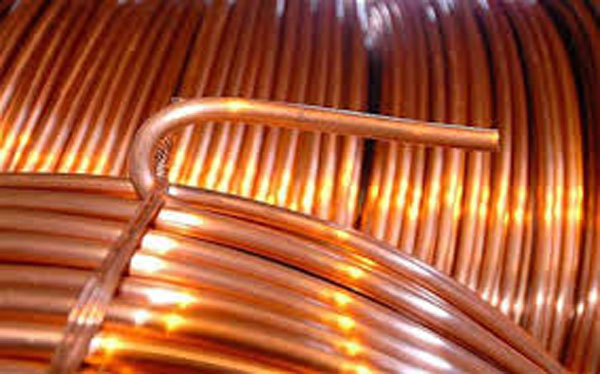 Copper hits weakest in a month, weighed down by firm dollar

LONDON: Copper slid to its lowest in a month on Thursday and other base metals also slipped on the prospects of a December U.S. interest rate hike, which boosted the dollar.

Zinc and lead touched their weakest levels in nearly a month while nickel hit a six-week low as metals also felt the impact of worries about global economic growth and soggy metals demand.

“The main driver behind the drop in prices must be the speeches of the Fed officials, driving the dollar higher and weighing on the wider commodity space,” said analyst Daniel Briesemann at Commerzbank in Frankfurt.

Federal Reserve Chair Janet Yellen on Wednesday pointed to a December interest rate rise as being a “live possibility”, sending the dollar surging to a three-month high.

A firmer dollar often curbs demand for commodities, making them more expensive for buyers outside the United States since they are priced in the U.S. currency.

Three-month copper on the London Metal Exchange closed down 2.4 percent at $ 5,011 a tonne, its weakest since Oct. 2.

Briesemann noted that the market seemed to ignore a firmer Chinese equity market, which often moves in tandem with base metals.

“The market is just concentrating on the negative, ignoring any positive factors. The mood is very, very negative and as long as this does not change, then we should probably be prepared for even lower prices,” he said.

Also weighing on copper was an increase in LME stocks of 6,400 tonnes.

Analyst Dan Morgan at UBS in Sydney said copper prices have been underpinned by signs that China’s easing measures may be helping the world’s second-biggest economy stabilise.

“I’m a little more constructive than others. I do think we’ll see a little bit more (power) grid spending in the next couple of months, which should also be supportive of prices.”

Shanghai aluminium premiums slumped to $ 95-$ 115, the lowest in more than three years, amid a domestic glut.