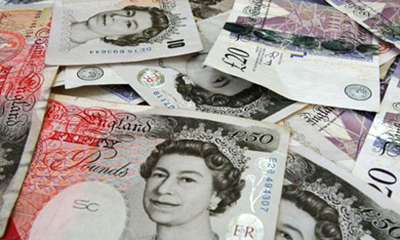 LONDON: Sterling skidded over 1 percent on Thursday and gilt yields fell, after the head of the Bank of England poured cold water on the view that it would raise interest rates shortly after the US Federal Reserve.

Investors who had been betting that the first UK rate rise since the financial crisis would come in the third quarter of 2016 pushed back those expectations to the end of next year, with a rate hike now not fully priced in until well into 2017.

The Bank of England gave no sign on Thursday it was in a hurry to raise interest rates, predicting that inflation, now near zero, would pick up only slowly even if rates stay on hold all next year, and highlighting the increase in external risks to the UK economy over the past three months.

That was in striking contrast to the Fed, whose chair Janet Yellen said on Wednesday a US rate rise was a prospect for December, and which earlier in the month dropped its previous warnings on global risks.

Only one BoE policymaker, Ian McCafferty, voted to raise rates this month, while the other eight members of the Monetary Policy Committee opted to keep them at a record-low 0.5 percent, where they have been since March 2009.

The BoE trimmed its forecast for economic growth for this year and 2016 and said inflation was likely to stay below 1 percent until the second half of 2016.

“Mark Carney put some distance between the US and UK outlooks today but it was the downbeat inflation report that left the pound nursing 1 percent losses as growth and inflation forecasts were downgraded,” said FX broker Foenix Partners managing director Richard de Meo.

“Despite the setback, we expect sterling to maintain the upper hand against the euro over the same period as (the ECB) moves toward accommodative policy and makes the UK look comparatively progressive.”

British gilt futures extended gains to stand up 34 ticks higher on the day at 117.37 after Carney had finished speaking.

They were around 117.04 before the rate decision. Yields also extended falls across maturities, with the 10-year yield down 5 basis points at 1.95 percent.

Two-year yields, particularly sensitive to changes in interest rate expectations, were 7 bps lower at 0.65 percent. They both were broadly steady before the rate decision.

Having rallied after the BOE’s initial release, the FTSE 100 drifted lower again to trade down 0.2 percent, although it was still up from the day’s lows.