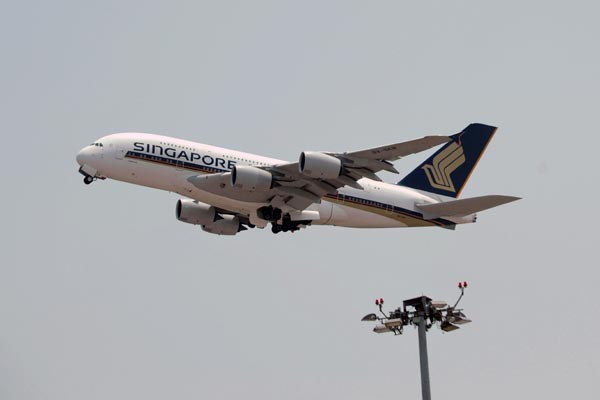 SINGAPORE: Singapore Airlines (SIA) on Friday announced a full takeover bid for its struggling budget carrier subsidiary Tigerair and vowed to redevelop it as an integral part of the group’s portfolio.

SIA currently owns 55.8 percent of Tigerair and the “voluntary conditional general offer” is for the shares it does not already own valued at around Sg$ 453 million ($ 322 million).

SIA said it intends to delist the low-cost carrier from the stock market.

“SIA’s objective for the offer is to derive enhanced commercial and operational synergies through a full integration of Tiger Airways into the SIA Group,” the airline said in a statement.

“SIA believes the offer will benefit shareholders of both Tiger Airways and SIA.”

The airline is offering Tigerair shareholders a price of Sg$ 0.41 per share in cash and an option to subscribe for SIA shares at Sg$ 11.1043.

SIA shares closed at Sg$ 11.15 apiece on Thursday before the carrier announced that its second quarter net profit more than doubled.

Both companies called for a trading halt Friday pending the announcement.

SIA said its offer will be funded from its “internal cash resources”.

The airline on Thursday said its net profit in the three months to September soared 135 percent to Sg$ 213.6 million from the previous year, boosted by higher dividends from long-term investments and the absence of share losses from associated companies after it classified Tigerair as a subsidiary.

Tigerair went public five years ago, with a maximum initial offer price of Sg$ 1.65, but the airline was hobbled by a string of losses as competition in the Southeast Asian low cost carrier market intensified.

A strategy to expand the Tigerair brand to Australia, Indonesia and the Philippines failed.

SIA, which is also facing tough challenges from Middle Eastern carriers and budget airlines, already has in its stable Scoot, a medium-haul budget carrier, and full-fare SilkAir, which serves leisure destinations in Asia.

In the three months to June this year, Tigerair reported a net loss of Sg$ $ 1.7 million, narrowing from a whopping Sg$ 65.2 million loss in the same quarter the year before.

“Tigerair has been doing terribly so it is only prudent on the part of SIA to consolidate the budget carrier into its stable of companies together with Scoot and SilkAir,” said Shukor Yusof, an analyst with Malaysia-based aviation research firm Endau Analytics.

“It would help to realign the balance sheet of Tigerair. But at the same time, it is not going to guarantee profitability for Tigerair in the near future,” he told AFP.

Shukor said competition has intensified in Southeast Asia’s no-frills carrier market with players that are “better placed” for the challenge, including Malaysia’s AirAsia, Indonesia’s Lion Air and Cebu Pacific of the Philippines.

SIA needed Tigerair to complete its portfolio, he added, especially with Singapore building a new terminal to maintain the city-state’s edge as a regional air transport hub.