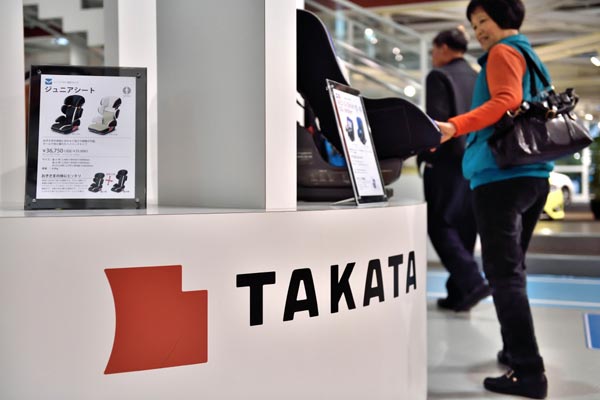 The Tokyo-listed stock dropped nearly 13 percent by the lunch break to 780 yen ($ 6.50), down by half from its price earlier this week, underscoring investor fears about the company’s future.

Takata’s rout was sparked by top client Honda this week dumping it as an airbag parts supplier. The automaker accounts for about 10 percent of Takata’s global sales, which were $ 5.3 billion last fiscal year.

Takata, which reports its latest earnings results later Friday, has warned it would book special losses over the affair.

The move came on the heels of US safety regulators slapping the embattled firm with a record fine, accusing it of deception over exploding airbags linked to at least eight deaths and scores of injuries globally.

Toyota has said it was monitoring the latest chapter in the crisis.

“We are continuing a thorough investigation to find out the truth as quickly as possible,” senior managing officer Shigeru Hayakawa told reporters at an earnings press briefing Thursday.

He added that the world’s biggest automaker will “adopt the best” inflators for its cars.

Rival Nissan has declined to comment on its future relationship with the airbag maker, but said it was “disappointed with Takata concerning the findings about its conduct”.

Accusing the company of dodging the issue for years, US safety authorities on Tuesday announced up to $ 200 million in penalties.

Takata’s airbag defect — thought to be associated with a chemical propellant that helps inflate the devices — can cause them to deploy with explosive force and send metal shrapnel hurtling toward drivers and passengers, killing some and leaving others with grisly injuries.

Some 50 million vehicles worldwide have been recalled over the problem.