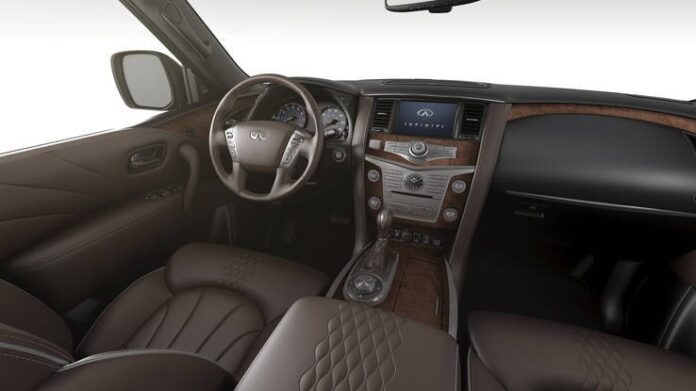 The looks polarize; the luxury does not

The general consensus in the office about the 2016 Infiniti QX80 is that it’s quiet, powerful, luxurious and ugly as all get out. I think I might be the only editor at One Autoweek Tower that doesn’t instantly recoil at the sight of the QXs bulky, bubbly sheetmetal regardless of whether it’s in people-eating purple like our old long-term car or in as-big-as-the-sky-at-midnight blue like this example. I don’t love it — the body, that is — but it’s no Pontiac Aztec either.

I will agree that the face is something only a mother could love. It looks a little droopy, a little Cro-Magnon, a little too…schnauzer-like. It’s weird that the headlights don’t go all the way up to the hood. I also think it might look better if the grille was brighter chrome, but I could be way off on that. Otherwise, I think the profile is cool and the rear end looks fine.

The newly named QX80 offers only a beefy, 5.6-liter V8 for power (you think a V6 could haul this three-ton beast around? Not quite); the engine makes 400 hp at 5,800 rpm and 413 lb-ft of torque at 4,000 rpm. It’s connected to a seven-speed automatic transmission and power is routed to all four wheels. 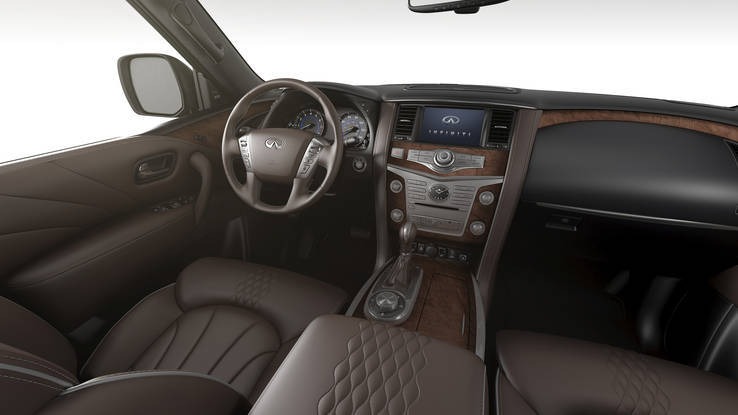 The Infiniti/Nissan radio setup is quietly one of the best in the business.

The QX80 sits atop Infiniti’s range, competing with other three-row luxury vehicles like the Cadillac Escalade, Mercedes-Benz GLS and the big Lexus LX.

Infiniti’s V8 feels more powerful than 400 hp on the road. If I had to guess from my butt dyno it felt more like 450. Takeoffs are nice and smooth and shifts, while not imperceptible, are soft and quick. The seven-speed does seem to be working overtime to keep this bruiser in the lower rpm range for better fuel economy and it does sort of hang up when you stomp it on the expressway. And at those times, one gear usually won’t do it. You need two, and you literally have to put the pedal to the floor to get it. I could also use a little more brake sensitivity, if I’m asking.

Despite giant wheels and tires the suspension absorbs almost all the potholes on the road, but I did hear some noise. These tires are low profile, so even noise from tarred expressway expansion joints makes its way into the cabin. Otherwise though, most road and wind sounds are kept out. The QX will rock a little if you have to yank the wheel, but it’s no more floaty than its competitors. Parking is a pain because of the size, but the Around-View camera does a good bit to ease that.

I remember our long-term QX and how it beeped every time you touched a lane marker. This new one doesn’t do that, I’m not sure if that’s because it was turned off or absent completely. There is a little light that goes off, but it’s much, much less annoying.

See, these big ol’ boats need some room to move around. Sometimes that means cheating to the side of the lane to give more space, and sometimes it means driving over the line completely. As long as the driver is paying attention, which I know is a tough ask, he/she should be able to maneuver without getting scolded.

Inside, the QX has nearly the room of a pickup truck without the open sky. I shuttled a giant, novelty-sized shoebox over to a buddy’s house and only had to fold the third row down. As for personal storage, the QX has a ton of it.

The look is very well put together as far as materials and gaps go, the seats are comfortable and the Nissan/Infiniti radio is one of the best and easiest to use in the industry. Views are commanding from the high seating position, but it does take a hop to get in comfortably. One more thing about the seats — they don’t have a lot of lateral support, especially in the shoulder area. Any sort of spirited driving makes you brace yourself on door or center console. But I suppose this car is too big to be doing any “spirited driving” anyway.

The baseball mitt brown leather is one of my favorite interior colors and I love the matte woodgrain trim too. In fact, this is almost my perfect interior for a luxury car.

Yes, the $ 90,000 price tag seems expensive even though this is the Limited model, but you can get a base QX80 for about 65k. The Mercedes GLS covers about the same range while the Cadillac Escalade starts at $ 74,000 and runs into the $ 90s too. Those two are definitely more normal looking, but I don’t think this Infiniti gives up much otherwise.

Would I buy it? No, I’d get two BRZs and a Miata, but I’m not in the market for a seven-passenger family hauler. If I was, I’d give it a look, mostly from the inside. 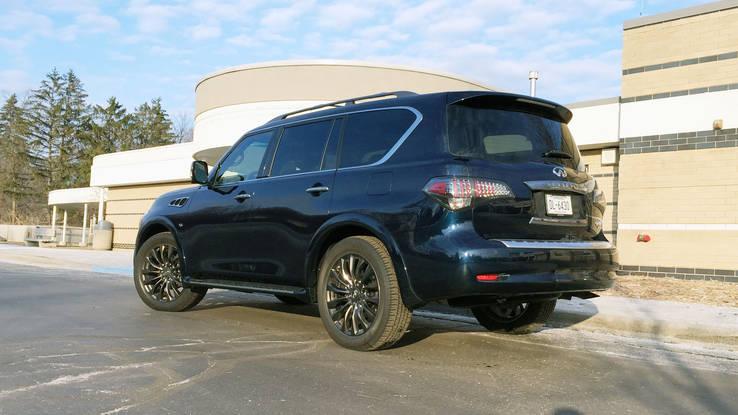 The rear 3/4 is probably the least offensive view of this SUV. Photo by Jake Lingeman

There is a lot to love with the QX80, as Jake pointed out: Power, a lavish interior and good driving characteristics. The one crux most people have with this homely human hauler is exactly that, the homeliness. It’s a melting model that only the builder could love.

I don’t know if I’ve reached a higher stage of consciousness, or have just gotten familiar with Infiniti’s styling (probably the latter), but I don’t think this thing looks that bad. I think what Jake already pointed out would help, especially reshaping the front fascia, but still – it’ll grow on you.

The QX is boatier than its competitors, and it likes to roll luxuriously while cornering. Boaty doesn’t equate to bad in this sense, I want my SUVs to be set soft in case I have to take one of these puppies off road – not like anyone actually would want to do that in this instance, but its worth mentioning.

Staying on road, you’ll find yourself in one of the most welcoming cabins available in a big SUV. The leather feels soft to the hand and the seats are fantastic – they nearly reach La-Z-Boy levels of fall-asleep comfort.

If I was forced to take a cross country roadtrip in a seven-passenger SUV, I would probably say this is the one for me. While I prefer the Mercedes-Benz GLS for whipping around town, I feel that this Infiniti’s insanely comfortable seats and respectable performance would make for a more relaxing trip.