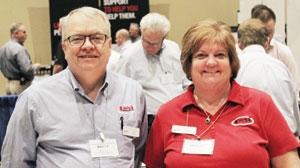 Speaking at the Gasketing and Converting Expo on April 6 in Orlando, Marty Laso, vice president of sales and marketing, and PAI Marketing Manager Bridget Hanson detailed the firm’s new EPDM and fluoroelastomer developed with metal shavings so that the rubber can be detected by x-ray machines.

“If a piece broke off in food processing equipment, they scan the product as it’s exiting the process, so they can pick up the piece of rubber, say in a bag of potato chips, by either x-ray or metal detection,” Loso said. “This way you don’t end up with an o-ring in your onion rings.”

The EPDM and FKM compliment the firm’s existing metal-detectable nitrile rubber and silicone compounds already offered by PAI. The company said stringent government regulations mandate that food, beverage and pharmaceutical manufacturers keep foreign material out of ingredients to ensure safety for consumers. Measures must be in place to detect a contaminated product before it is distributed.

Component parts used in food and drug processing equipment can become damaged either by improper installation or excessive wear during operations, causing fragments of the part to wind up in the ingredients. The firm said in a news release that chemicals used for cleaning and sterilization of equipment can cause rubber seals to degrade.

“Food processing equipment has very aggressive cleaning standards,” Hanson said. “A lot of those chemicals break down rubber parts, just by the nature of how they operate. If a piece of the rubber were to deteriorate and degrade, then mix in with your hamburger, they can find it so that you’re not eating it. The seal is just keeping the machine operating, but they want to make sure that none of those parts are getting into your food.”

The firm’s release said all four of the products are sanctioned under FDA Title 21 CFR 177.2600 and 3A Sanitary 18-03 approved. Hanson said PAI has noticed an uptick in the number of requests from customers on the product line.

“It has to be detectable from a certain distance at a certain rate,” Loso said. “We have to have enough of the filler in there to make it detectable. More and more food processing operations have this requirement.”