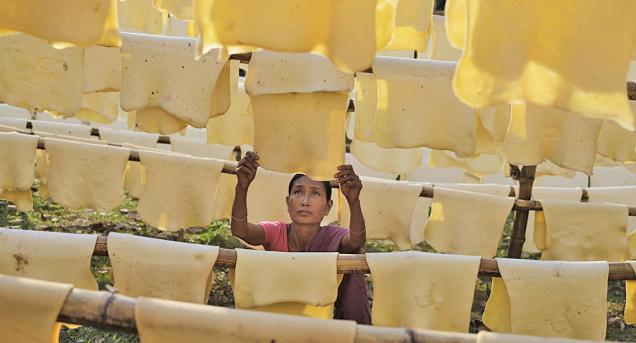 Rubber farmers are pinning hopes on the monsoon to start full-fledged production, even as recent price improvement in the crop has brought cheers to the sector.

The prevailing dry weather conditions have drastically impacted natural rubber production, which stood at 5.63 lakh tonnes in FY16. A tight supply crunch in the domestic market, coupled with rise in international prices, has led to a price surge, which is now hovering at ₹138 per kg today from ₹90 in the last few months.

However, majority of the growers could not capitalise on the price improvement, as arrivals in the domestic market during February-March were low due to non-availability. This was particularly because of the Kerala government’s ensured price procurement scheme of ₹150 per kg for RSS-4 grades. This prompted growers to sell the commodity in the open market, George Thomas, a grower based in Kanjirappilly in Kottayam district, told Business Line. This, he added, has led to a tight supply as rubber farmers normally do not practice the tendency to hold stock for long gestation periods.

Thus, low availability due to drought conditions, coupled with reduced imports in April, has forced consuming industries to purchase rubber from the domestic market. With the recent price rise, he said majority of growers are now showing inclination towards rubber though un-remunerative prices have compelled them to stop harvesting and even abandoning tapping.

However, the absence of sufficient summer rains in April had delayed tapping for the new season and farmers now await the blessings of rain gods. The supply tightness is expected to continue until the market receives fresh arrivals, which depends on the monsoon, he added.

With the steep increase in prices, production could increase once the weather turns conducive. The upcoming rainy season will have considerable influence on natural rubber in the local as well as international markets, said Anu V Pai, Analyst at Geofin Comtrade.

The market, she added, is showing signs of revival with prices having recovered more than 50 per cent from the multi-year lows it had hit in February.

“The rebound in crude oil, joint action by the top natural rubber producing countries such as Thailand, Indonesia and Malaysia in the form of Agreed Export Tonnage Scheme, and monetary easing by China are all lending support to prices,” she said.

N Dharmaraj, President of UPASI, said that availability is a problem today, especially for consuming industries at a time when domestic prices are figuring lower than the landed imported price. Besides, the reduction in tappable area to 50 per cent and decline in latex output on prevailing weather have also contributed the drop in production.

Expressing hope that farmers would shift to tapping with the start of the monsoon, N Radhakrishnan, Advisor, Cochin Rubber Merchants Association, said this would push up production and fetch better returns to farmers.

According to Rajiv Budhraja, Director General, Automotive Tyre Manufacturers Association (ATMA), availability has emerged as a major issue amidst rising prices, in the last two months. Tyre companies have no option but to import Natural Rubber to meet the current and expected demand. “We have already conveyed our concern to the authorities in this regard,” he said.