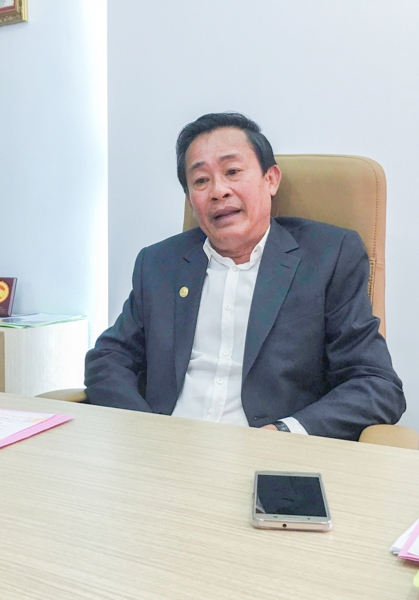 Vietnam is one of Cambodia’s biggest trading partners and has also been one of the top direct investors into the Kingdom over the last two decades. Most of the investment from Vietnam has been in the agricultural sector. Leng Rithy, the Chairman of the Vietnam Rubber Group (VRG) and a representative of Vietnamese investors in Cambodia, talked to Khmer Times about Vietnamese investment, businesses and the concerns of the public.

KT: Can you tell us about Vietnam’s investment in Cambodia? What are the main sectors that Vietnamese companies invest in?

Mr. Rithy: The investments from Vietnam have increased a lot from 2006 until now, mostly in agro-industry [mainly rubber], banking, telecoms and tourism [aviation]. These four main sectors make a big contribution to the development of Cambodia’s economy. In addition, Cambodia’s investment laws means the country is very open to all investors – any foreign investor can invest here, the same as local people.

KT: You are also chairman of the Vietnam Rubber Group (VRG).  How many companies from Vietnam have invested in rubber plantations in Cambodia?

Mr. Rithy: Based on the data that I have from the ministries of agriculture and environment, there are about 40 companies which have land concessions from the government to invest in rubber plantations covering nearly 200,000 hectares in eight provinces – Rattanakiri, Mondulkiri, Stung Treng, Kratie, Kampong Thom, Preah Vihear, Siem Reap and Odor Meanchey. We were awarded land concessions by the government starting in 2007 and so far, we have four companies that started collecting the resin in 2015 in three locations – Kampong Thom, Ratanakiri and Kratie.

KT: What has the government done to help with concerns that have been raised over land concessions?

Mr. Rithy: The government has set up inter-ministerial committees to deal with the land concession issues and that’s really good because it is a big help for us when there are claims that we grabbed the local community’s land. Some small groups of people now don’t come to claim the land anymore and they always blamed the government who give us the land. I think they don’t know what the government does. Actually, the government has clear mechanisms before they give the land.

Now, with the newly established inter-ministries, it helps a lot in dealing with the problem of land concessions by cutting out any affected areas. I see the problem of land grabbing has been very much improved now and all the claims that we grabbed land have gone silent. We still urge the concerned ministries and local authorities to keep doing their work in order to know clearly what is happening.

KT: The global price of rubber has declined dramatically over the last few years, while most of the investment from Vietnam has been in rubber plantations. How has this drop in price affected them? Will they withdraw their investments in the rubber plantations here and try another agro-industry?

Mr. Rithy: The price of rubber has been declining over the last three years. The price had peaked at nearly $6,000 per ton, but now dropped to about $1,000 per ton, and that is a huge drop. Of course, it definitely affected us and made some companies raise their concerns that if the price keeps declining would they make enough money to pay their staff’s salaries. This was just the feelings of a few companies.

My view is that I have observed since 2006 until now the global rubber price. When it jumped too much and dropped too much, that is the same trend as my observations and we started declining from 2013 – that’s the cycle. I saw that there were a few small companies which had land concessions from the government that stopped their investments and a lot of households cut down their rubber trees and planted other crops. That was not good. If the rubber price goes up, they will lose.

For the VRG in Cambodia, things are still good even when the price declines. We haven’t started collecting the resin yet, so we hope the price will go up in the next two or three years – that would be really good for these companies. Those who have kept their rubber trees will also be in a good position if the price goes up. I would like to suggest to small companies and households, don’t cut down the rubber trees and just reduce the costs of fertilizer so they can keep the trees.

KT: Do you have any plans to build factories here?

Mr. Rithy: Normally with the master plan of each company and under directives from the ministries of agriculture and environment, the law requires us to set up factories here because we cannot export the fresh resin. For the VRG, when the global price of rubber declined, we had already built a processing plant in 2014 and it came online in 2015 in Rattanakiri.

That also helps the householders near the plant. There is one more factory in Kampong Thom, which was built in early 2015 and finished at the end of 2015, and by the end of 2016 and early 2017 there will be many more factories built and finished. We have no plan to step back because we follow our master plan, even though the price has been declining.

KT: Are you optimistic about Vietnamese investment in Cambodia?

Mr. Rithy: With the materialization of the AEC by the end of December 2015, it was a proud moment for all of us and we see that our economic relations are getting better from time to time. We see the investment flow from Vietnam to Cambodia keeps increasing and the flow of goods between the two countries are also on the rise.

What I see is that our investment in rubber plantations here is a really big contribution to the local economy, especially in helping people improve their livelihoods in the rural areas. The rubber sector is different from other sectors. For example, if we spend $1 million on the investment per month, about $300,000 of that will go to local people. The sector doesn’t only improve the local economy in rural areas, but also helps reduce the number of people leaving their homes to seek jobs abroad. Rubber plantations are a long-term investment, not short-term, and that is a good contribution to economic development.

By 2018, if we combine all the investments from the VRG, other small-sized companies and households, that makes a total of 300,000 hectares. From that we will be able to produce more than 500,000 tons, and if we multiply that and one ton is worth $2,000, that will be more than $1 billion per year. More than $300 million per year of that will go to the local community and that is big money to help the economy.