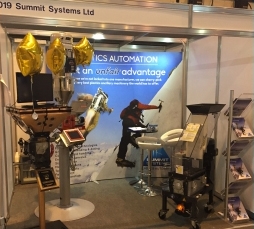 The Maguire golden blender is taking pride of place at auxiliary equipment supplier Summit Systems’ stand at the event.

The two-day PDM show began June 14. The blender arrived from Poland as part of its global world tour. It will stay with Summit Systems for the exhibition, prior to jetting back to Aston, Pa.-based Maguire for more promotional dates.

Summit Systems managing director Mike Jordan, said: “It is fantastic to receive the blender which represents Maguire’s phenomenal global success as the first, and still the best weigh scale blender in circulation.

“It also marks our own successful relationship with Maguire. I met Steve Maguire in America in 1989 which led to me bringing the WSB concept to the [United Kingdom]. We are now in our 27th year together, even sharing a building in Tamworth.”