Sonoco Products Co. is striking a $ 280 million deal to sell off its blow molding operations to Amcor Ltd.

The move includes seven manufacturing plants — six in the United States and one in Canada — that have sales of $ 210 million annually, Amcor said. Sonoco said the sites produce containers for the personal care and food and beverage markets.

For Hartsville, S.C.-based Sonoco, the move allows the firm to focus on targeted growth businesses, including flexible packaging, thermoforming rigid plastics and temperature-assurance packaging for transporting pharmaceuticals, biologics and vaccines.

Sonoco spokesman Roger Schrum indicated the company’s Sonoco Plastics operations, after the sale, will still have about $ 400 million in annual sales. The business includes thermoformed packaging as well as a strong position in trays.

That segment of the business also includes the emerging TruVue can business that Sonoco has developed to compete against traditional steel food cans. TruVue cans are extruded see-through plastic, with metal ends, and designed to showcase their contents on the shelf. Sonoco Plastics also makes injection-molded industrial related equipment such as spools, reels and cores.

For Hawthorn, Australia-based Amcor, the move allows the firm to push further into specialty containers in North America.

“These facilities service attractive sub-segments in the personal care and specialty food markets and the business brings strong, long standing relationships with leading multinational and large domestic customers,” Amcor said in a statement.

The Sonoco operations will become part of Amcor Rigid Plastics and help balance the firm’s product offerings by end market. That includes a big boost in the home and personal care segment, which accounts for more than two-thirds of the business coming from Sonoco. 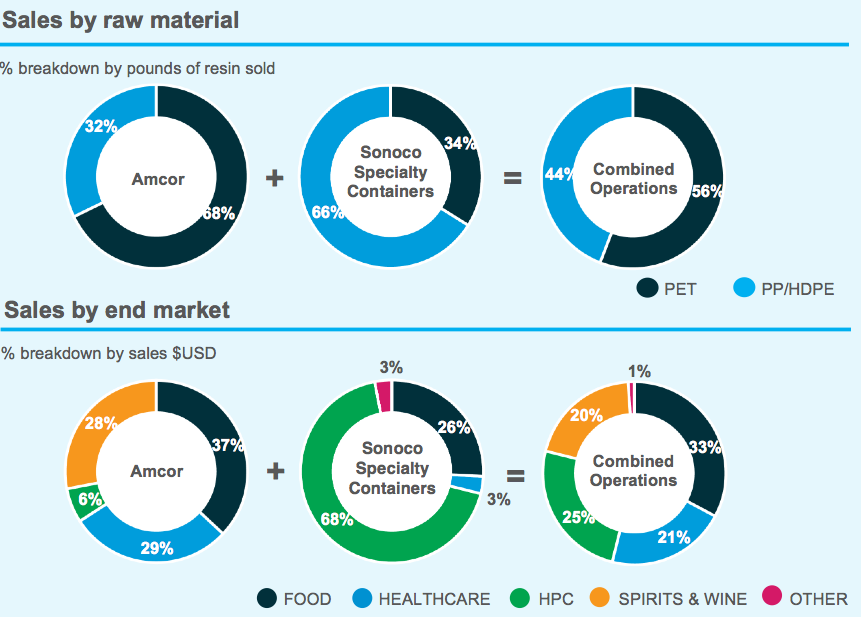 Amcor Ltd. Amcor Ltd. said it will add diversity to its markets and materials with the Sonoco Specialty Containers acquisition.

Once the deal closes, the combined operations will feature 33 percent of its sales in food, 25 percent in home and personal care, 20 percent in spirits and wine, and 21 percent in health care. The other 1 percent is just that: other.

“Amcor Rigid Plastics business has significant growth opportunities, including in segments outside of the traditional non-alcoholic beverage markets. Part of our strategy to grow this business includes acquiring specialized manufacturing capabilities which unlock further growth in key segments,” Amcor CEO Ron Delia said in a statement.

Amcor is paying 8 times earnings before interest, tax, depreciation and amortization, or EBITDA, over the last 12 months. The company expects to achieve about $ 50 million in annual profit before income tax, or PBIT, by the end of the third full year of ownership. That includes about $ 20 million of synergy benefits and what the company calls underlying market growth.

Amcor Rigid Plastics calls itself one of the largest makers of rigid plastic packaging for food, beverage, spirits, personal care, home care and healthcare. It has 62 locations in 12 countries.

The company, even before announcement of the deal, was the second largest blow molding company in North America with estimated annual sales of 2.26 billion in that region, according to Plastics News data. Sonoco is No. 18, with sales of $ 235 million.