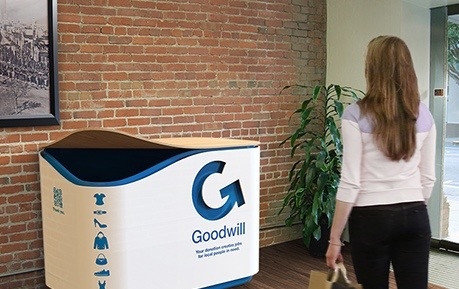 Thermoforming an updated charity bin for the 21st century

Goodwill Industries San Francisco The goBin fits into apartment lobbies and offices, where they are more likely to be used than if donors have to make a special trip. 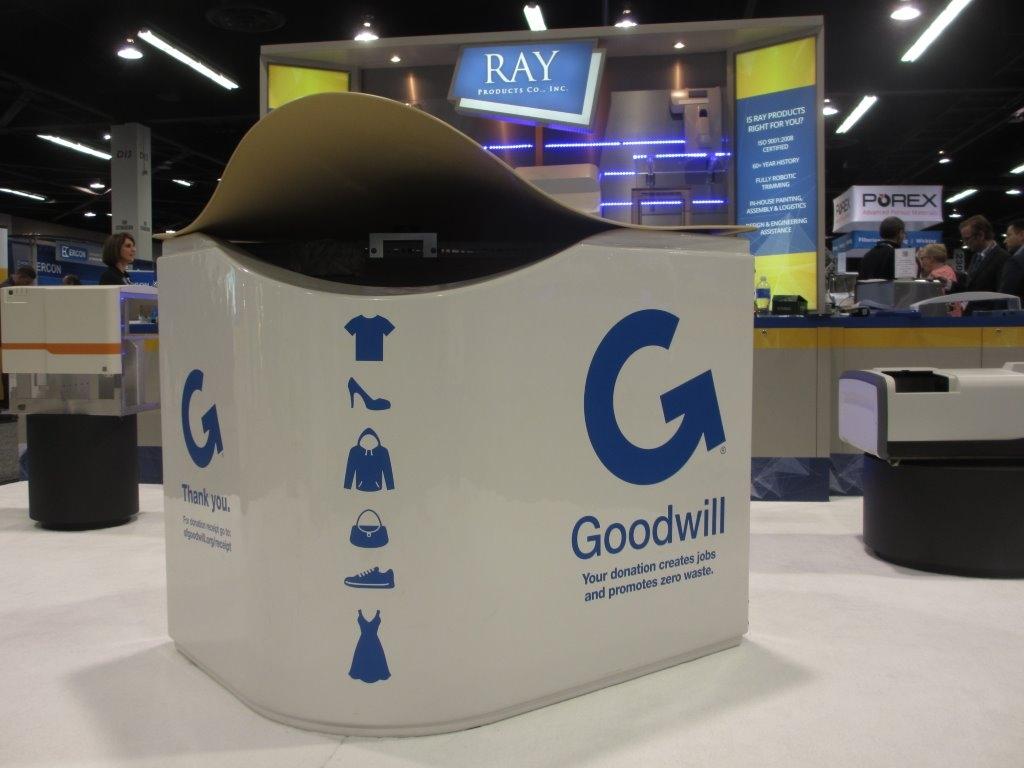 The goBin indoor collection container is designed to go inside apartment building lobbies and office complexes where people already are, rather than forcing them to make an extra trip to donate household items.

Some of the goBins are also “smart” boxes, with a QR code on the side of the boxes that donors can scan to get an emailed receipt, and a sensor inside that alerts charities when the bins are full.

The Goodwill program also is targeted at clothing items such as shirts, pants, dresses and even shoes, which are far more likely to end up in the dump than being recycled.

“As we approach our 100th year serving the San Francisco community, we are innovating on our processes and services as we develop our strategies” for the next century, William Rogers, interim president and CEO of Goodwill San Francisco, said in a telephone interview. Goodwill SF developed the goBin with design group frog design Inc. and Ray Products of Ontario, Calif.

Goodwill SF has goBins for use in its own market and has also sold them other community operations: In Indianapolis for central Indiana; Albuquerque for New Mexico; Goodwill Keystone for portions of Pennsylvania; Fort Worth, Texas; Cincinnati for the Ohio Valley; San Jose, Calif., for Silicon Valley; and Goodwill Ontario Great Lakes in London, Ontario.

“So far, it is working,” Rogers said of the program. “People are giving a lot of donations through goBins, and sensors are providing alerts on the need for pickups.”

Frog design worked on a pro bono basis with Goodwill and the first prototype — molded with wooden tools — was installed at the San Francisco commercial building of Kilroy Realty Corp. in July 2015. 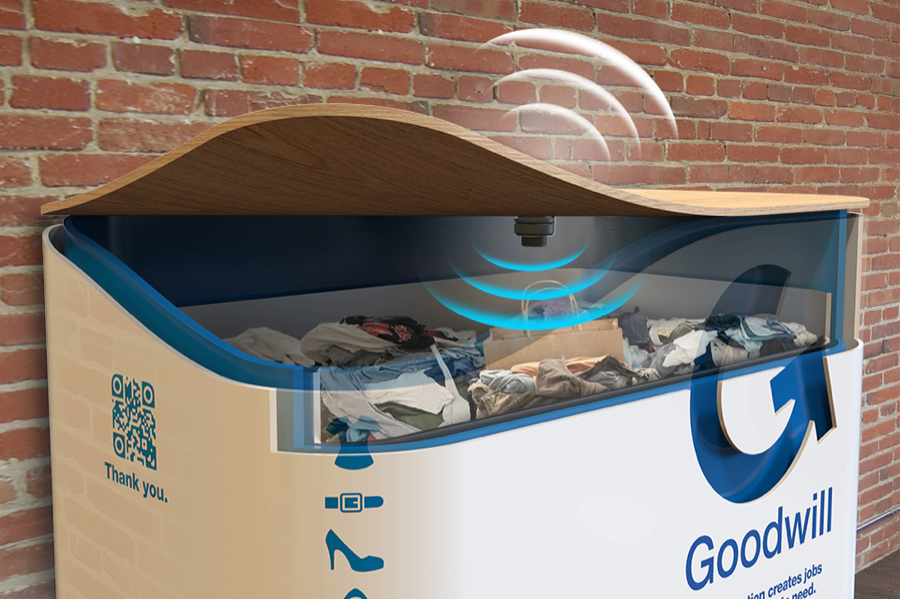 Goodwill Industries San Francisco A “smart” version of the goBin, illustrated here, includes a QR scanner on the side to email receipts to donors and a WiFi-enabled sensors to let Goodwill know when the bin is full and ready for collection.

From the start, Goodwill San Francisco wanted to focus on clothing donations. On average, each American sends 70 pounds of textiles to the dump every year, rather than donating them.

For San Francisco, that translates to 4,500 pounds of textiles entering landfills every hour, making up 5 percent of the total volume of waste. Increasing donations of soft goods to Goodwill not only helps the charity, it helps the city toward its goals of reducing waste, Goodwill officials noted.

But because San Francisco residents tend to drive less, getting bags of donations to collection centers can be complicated. Putting bins into prime locations — and making them look good — became a driver behind the goBin.

“Convenience is the most important factor for people deciding what to do with the items they no longer need,” said SFGoodwill Director of Donations Leslie Bilbro in a news release. “Paradoxically this is why many textiles end up in landfill. Historically it’s just been easier to throw them away.

“Responding to today’s urban lifestyle, our goBin will help people to do the right thing for the environment and for their fellow residents who need a second chance in life.”

“Our purchase order to begin production came in January 2016, and we shipped out the first units in early March” to Goodwill of Greater Washington D.C., said Jason Middleton, vice president of sales and development for Ray Products.

Ray Products uses standard ABS sheet in forming the goBin components with starting thicknesses of 0.25 inch for the sides and 0.125 inch for the lid.

“The original design was created with a three-part assembly for the sides of the bin to accommodate a thermoformer with a smaller capacity than ours,” said Middleton. “Because our equipment can thermoform up to a full 10-by-18 feet with up to 40 inches of depth, we were able to consolidate those three parts into just two. This helped to lower the per-unit costs, increase the rigidity of the final product and make on-site assembly quicker and easier.”

Goodwill directly distributes an optional electronic module to the end users. Donors can scan a QR barcode to receive a tax receipt via email, and an internal sensor automatically alerts the local Goodwill that a bin is full and in need of emptying.

Locations or regions not opting for the electronic component empty goBins the traditional way, when the bins’ monitor or building manager notifies Goodwill about the need for a pickup.

Typically, Ray Products ships each bin to its final location in ready-to-assemble form.

“We handle everything from thermoforming to applying graphics and packaging each unit with assembly instructions and hardware,” Middleton said. “When Goodwill is ready to deploy more units, they just let us know, and we ship them out to their final destinations.”

Goodwill San Francisco received a $ 50,000 grant from the San Francisco Department of the Environment for partially funding the goBin initiative as part of a zero textile waste awareness campaign.

“Environmental sustainability is a big part of what we do,” Rogers said.