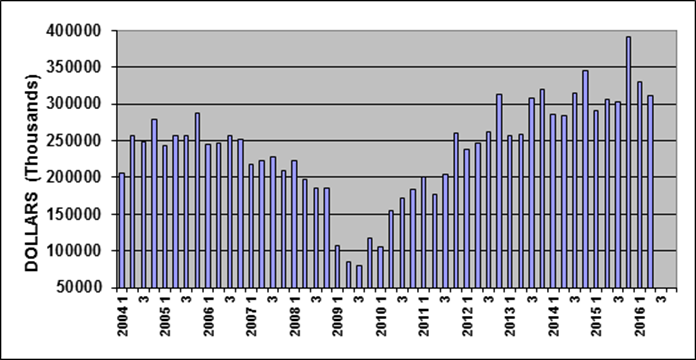 Society of the Plastics Industry Inc. Sales of plastics machinery continued to grow in the second quarter in North America, but at a more moderate pace.

Second quarter North American shipments of plastics machinery continued a run of three straight quarters of growth compared to 2015 — but that year-ago growth rate measure rate is moderating, and shipments declined from the first quarter so far this year, according to the Society of the Plastics Industry Inc.

“The upward trend in the machinery data continued in the second quarter, but the year-over-year growth rate moderated,” said plastics economist Bill Wood. “The quarterly comparisons will become more difficult in the coming quarters, so the trend of gradual moderation in the growth rate will likely continue.”

“The incentives to invest in new equipment will persist, so the shipments totals are expected to stay close to the current levels,” said Wood, who runs Mountaintop Economics & Research Inc. and analyzes the plastics machinery statistics for SPI’s Committee on Equipment Statistics.

Washington-based SPI reports $ 312.1 million worth of North American total primary-equipment shipments in the second quarter — including injection molding presses, extruders and blow molding machines. That was 2 percent higher than the second quarter 2015 total of $ 306.1. SPI said primary equipment has grown by 7.6 percent from the first half of 2015.

But the dollar value of shipments declined by 5.6 percent from the first quarter of 2016, SPI reported on Sept. 12.

Wood said the long-term upward trend in the SPI data follows broader trends in two major U.S. economic statistics that measure demand for industrial machinery. The Bureau of Economic Analysis reports the business investment in equipment grew by 2.4 percent on a seasonally-adjusted, annualized rate in the second quarter from the second quarter last year. That followed a 3.3 percent year-over-year gain in the first quarter of 2016.

Wood said the Census Bureau reported the total value of new orders for industrial machinery was fairly flat, slipping by less than 1 percent, in the second quarter compared to the year-ago period. But the industrial equipment orders rose 15.8 percent from the first quarter of this year.

Wood, who also is Plastics News economics editor, projects that gross domestic product will grow around 2 percent this year, because of a “slow, but steady improvement” in wages and incomes resulting from stronger employment levels.

“Gains in U.S. GDP were disappointing in the first half of 2016, but economic growth will be closer to the long-term trend in the second half of the year. This means consumer demand for plastics products will gradually increase for the foreseeable future,” Wood said.

Wood said the global market conditions also moderated in the second quarter, as Europe has emerged as the region with the strongest expectations for economic improvement in the coming year. North America, including Mexico, are expected to be steady-to-better. The outlook for Asia and Latin America are less optimistic that they were in the first quarter, but conditions should hold mostly steady, he said.

The Committee on Equipment Statistics said 77 percent of its survey respondents expect market conditions to either hold steady or get getter during the next 12 months. That’s down from 84 percent in the first quarter.

Machinery officials think medical and packaging will have the strongest demand going in the coming year, while the expectations are mixed for the automotive market.