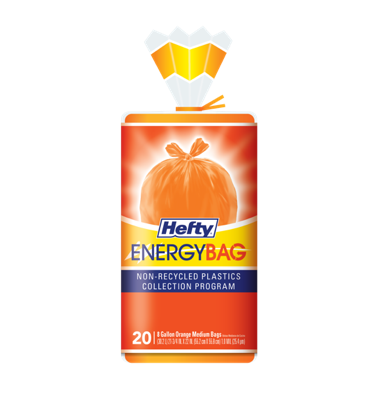 The color of the bag is different. The end use is different. And the name is slightly different. But the goal remains the same: diverting hard-to-recycle plastics from the waste stream.

The plan is to capture an estimated 36 tons of previously unrecycled plastics during an initial program phase, keeping the material out of local landfills, organizers say.

A total of 6,000 homes in the Omaha area are receiving their orange colored Energy Bags this week and are being asked to segregate the hard-to-recycle plastic — think drink pouches, chip bags and candy bar wrappers — into those bags.

Resin maker Dow Chemical Co. was part of the initial Energy Bag program in Citrus Heights, Calif., two summers ago that used purple bags and diverted 3 tons of plastics to Agilyx Corp. in Tigard, Ore., where the material was made into oil through pyrolysis.

But Agilyx has since changed its business model to concentrate on recycling only used polystyrene into styrene monomer that can then be used to make new products.

The new Hefty Energy Bag program takes what might be considered a more-conventional approach to the plastics’ end use and will send the material to Systech Environmental Corp. where it will be used as cement kiln fuel.

Cement kilns have long been the refuge for difficult-to-recycle materials that have Btu value, such as tires, waste oils and roofing shingles.

“The Energy Bag Pilot demonstrated resource recovery of non-recycled plastics is a viable municipal process and serves as the foundation of the Omaha area program,” said Jeff Wooster, global sustainability leader at Dow, in a statement. “As the largest resin provider to the packaging industry, we view plastic as a valuable resource.”

Residents are being asked to use the orange plastic bags to segregate their otherwise non-recyclable plastics. Those bags can then be put into recycling carts and bins where they will be collected with other recyclables, but then segregated at a First Star Recycling materials recovery facility. They then will be sent off to the cement kiln to be used as fuel.

Other recyclables, such as plastic bottles, will continue to go into the traditional recycling stream and be processed as usual at the MRF. They are not segregated in the Energy Bag.

Along with Dow, Systech, First Star and Hefty brand owner Reynolds Consumer Products LLC, other companies involved in the project are Recyclebank, a rewards-for-residential recycling program operating in the Omaha area, and ConAgra Foods, the food giant that until earlier this year was based in Omaha.

When the Energy Bag program first started, organizers said they wanted to pick a bag color that stood out and could easily be removed from the recycling stream at a MRF. This latest version of the program moves from purple to orange bags. Hefty’s branding also closely associated with the color orange.

Dow, which announced the new initiative, declined to answer questions for this story.

While the announcement indicates the program will take place in Omaha and surrounding areas, a tweet from a company official also indicated the city of La Vista, Neb., also is supporting the program.